CAIRO- President Mohamed Morsi on Wednesday proposed a "consensus government" as a way out of Egypt's crisis, as tens of thousands of political rivals took to the streets and an army deadline urging him to meet the people's demands expired. 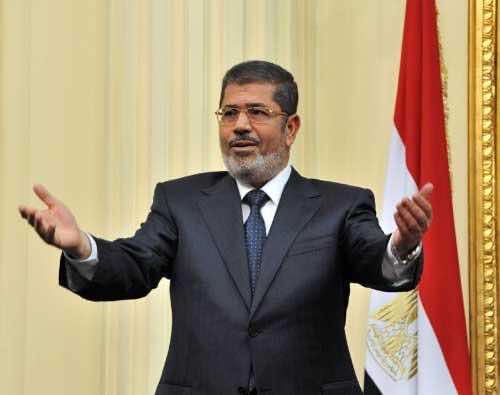 CAIRO- President Mohamed Morsi on Wednesday proposed a “consensus government” as a way out of Egypt’s crisis, as tens of thousands of political rivals took to the streets and an army deadline urging him to meet the people’s demands expired.

“The presidency envisions the formation of a consensus coalition government to oversee the next parliamentary election,” Morsi’s office said in a statement on Facebook.

Despite the expiry of the deadline, the army was yet to announce its next move.

Tens of thousands of people continued to protest in Cairo’s Tahrir Square for an anti-Morsi protest that dwarfed a rally by the embattled Islamist leader’s supporters in Nasr City, on the opposite side of the capital.

In scorching heat, police officers handed out bottles of water to the demonstrators crammed around their patrol vehicle in the middle of Tahrir, epicentre of the 2011 revolution that ousted dictator Hosni Mubarak.

The powerful military issued a 48-hour deadline on Monday for Morsi to meet the “people’s demands”, a day after millions of protesters took to the streets across the troubled country calling for him to resign.

Thousands of people were also gathered in Nasr City in a show of support for Morsi, despite an attack by a group of men that killed 16 of them and left 200 injured overnight.

That spate of bloodletting took to almost 50 the number of people killed in Egypt since the latest crisis flared a week ago ahead of Sunday’s anniversary of Morsi’s first turbulent year in power.

The interior ministry warned police would respond firmly to any further violence on Wednesday as the armed forces took up positions around key Cairo installations, including the state broadcaster.

Opponents accuse Morsi, Egypt’s first democratically elected president, of having betrayed the 2011 revolution by concentrating power in Islamist hands and of sending the economy into freefall.

His supporters say he inherited many problems, and that he should be allowed to complete his term, which runs until 2016.

Ahead of the deadline at 4:30 pm (1430 GMT), General Sisi held talks with top brass, a source close to the army told AFP.

Also present were representatives of the Salafist Al-Nur party and the Freedom and Justice Party, the political wing of President Morsi’s Muslim Brotherhood, said the source.

Military spokesman Colonel Ahmed Aly said the armed forces general command had “held talks with religious, political, national and youth leaders” and that it would issue a statement as soon the meeting is over.

In an early morning speech, Morsi said he had been freely elected to lead Egypt a little more than a year ago and intended to stick to his task. The only alternative was more bloodshed, he warned.

Upping the stakes, senior armed forces commanders meeting on Wednesday swore to defend Egypt with their lives, a source close to the military told AFP.

“We swear to God that we will sacrifice our blood for Egypt and its people against all terrorists, extremists and the ignorant,” they declared in an oath led by General Sisi, the source said.

Egypt’s press predicted Wednesday would be the day of Morsi’s departure.

Aside from Tahrir and Nasr City, Cairo’s streets were unusually quiet Wednesday, with many choosing to stay home over fears of more violence.

Developments in Egypt hit world financial markets, with the Dow Jones Industrial Average looking past solid American employment data to register a  0.19 percent fall and New York crude hitting a 14-month peak on concerns that the crisis could affect the rest of the Middle East and disrupt supplies.

All eyes were on the military, after government daily Al-Ahram reported details of the its roadmap for the future.

The plan provides for an interim administration, of up to one year, which would include the head of the supreme constitutional court and a senior army figure.

The constitution, controversially approved by Morsi’s Islamist allies in December, would be suspended for up to 12 months while a new one was drawn up and put to a referendum, before presidential and legislative elections.