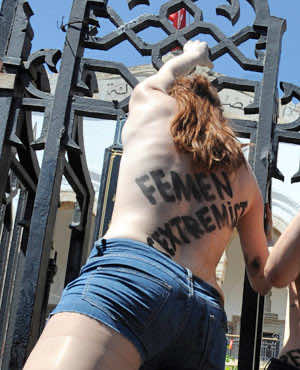 FEMEN activists, who stirred uproar recently following their controversial way of protest or what they call ‘Topless Jihad,” are being progressively banned from Facebook. The decision came against the backdrop of Facebook’s campaign against pornography and violence.

In an article published in the Huffington Post, Inna Shevchenko, FEMEN leader in France, protested against Facebook, which just closed their main page on Sunday on the grounds that FEMEN topless photos promote “Pornography” and “prostitution.” On Saturday Facecbook had already closed FEMEN’s French page. Both pages had reached 170,000 followers, according to  Inna Schevchenko.

“This act is the logical continuation of the war waged against the FEMEN by various Internet groups of reactionaries,” said Inna Shevchenko. For Giuseppe Di Bella, a historian and engaged citizen, the attitude of the firm Zuckerberg is “absurd.”

“We may not always agree with the actions of the FEMEN, often highly publicized. But we can only salute the courage of these feminists – whose motto is ‘Get out, get undressed and win’ – that are fighting for freedom and against all forms of obscurantism. They fight, even at the cost of their freedom as was the case in Tunisia, for women’s rights, for the protection of the environment, against homophobia, and against the intolerance of certain religions,” said Giuseppe Di Bella.

The decision of Facebook to close several of FEMEN pages is considered by human rights activists as an “infringement on freedom of expression.”

“Facebook, which has less and less the wind in stern and is increasingly losing its users, would do well to review its methods of operation, which are often opaque. When a page is closed, that is often very difficult for its managers to be heard, to defend themselves,” Mr. Di Bella noted.

Sara Rachak, a Moroccan-American blogger resident in Enola, Pennsylvania, expressed her disagreement with the idea of closing FEMEN page.

“We can’t hide the fact that those events ( FEMEN topless protests) took place. It’s the bare truth and it should not be hidden nor laced up in some sort of twisted lie,” she told Morocco World News. FEMEN’s way of protest is “wrong on the religious and social level, but denying them the right to express themselves and get published is unacceptable,” she continued.

FEMEN movement was received with much criticism in the Arabo-Islamic world and its method of protest is considered by many commentators as an onslaught on moral values and decency that characterizes Islamic societies.