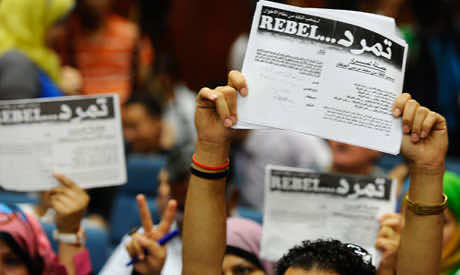 “The people’s legitimacy was victorious,” the flagship government-owned Al-Gomhuriya splashed on its front page.

“And the people’s revolution was victorious,” read the main banner in state-owned Al-Akhbar.

The independent Sherouk’s headlines said, “The people and the army won” and “The revolution ends the rule of Morsi and the Muslim Brotherhood”.

Its front-page depicted Tahrir Square, epicenter of the 2011 revolution, packed with thousands of people, under the headline: “Ouster of Morsi as demanded by the people”.

Al-Watan, an independent paper known for its anti-Islamist bent, headlined: “Egypt is back with us again”.

Wafd, the mouthpiece of the liberal party of the same name, said: “The people halted the (Brotherhood’s) rule with a revolution protected by the army”.

“IT’S A REVOLUTION… NOT A COUP, MR. OBAMA!” Tahrir declared in English across the top of its front page.

While U.S. President Barack Obama has said the United States was “deeply concerned” by the military’s toppling of Morsi, he has stopped short of labelling the act as a military coup.

On Tahrir’s back cover were a series of photographs of words that the celebrators flashed on to the facades of massive government buildings around the square using green laser lights.

“Leave,” “Down with the regime” and “Revolution”, they read.

Freedom and Justice, the paper of the FJP party linked to Morsi’s Brotherhood, chose to ignore the events of Tahrir and instead highlighted protests elsewhere by pro-Morsi Islamists.

“The people take to the streets in support of legitimacy,” it said, while underlining a last-ditch bid by Morsi to make concessions to the opposition which ultimately failed.