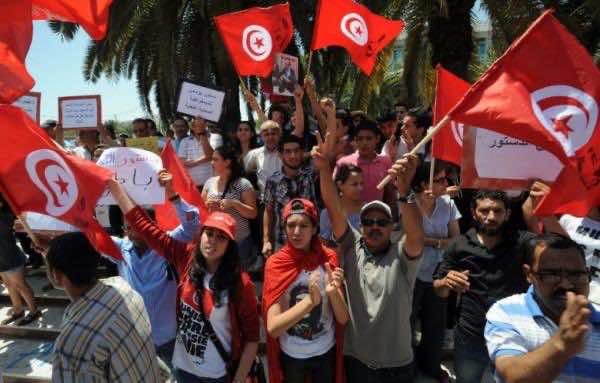 A movement called Tamarod has launched a petition to have Tunisia’s National Assembly dissolved, in a campaign similar to the one in Egypt that led to the army ousting the president, one of its organisers said Thursday.

“We don’t want any support from the political parties to protect our credibility,” Mohamed Bennour told AFP.

His comments came shortly after the head of the ruling Islamist party, Rached Ghannouchi, dismissed suggestions that the massive protests in Egypt which led to Islamist president Mohamed Morsi’s ouster on Wednesday might be repeated in Tunisia.

“We have taken a serious strategy based on consensus especially between the Islamist and modernist movements, which has saved our country from the risk of divisions,” Ghannouchi told the pan-Arab daily Asharq Al-Awsat.

But Bennour, who called himself a “rebel,” and said he was “employed in a business,” claimed that 180,000 signatures had been gathered in the past three days for the anti-government petition, “essentially by going from door to door
around Tunisia.”

The claim could not be verified, but the group’s Facebook page has less than 4,500 members and the online petition has less than 10,000 signatures.

The National Assembly was elected in October 2011, months after the popular uprising that toppled veteran strongman Zine El Abidine Ben Ali and touched off Arab Spring revolutions across the region.

The parliament is dominated by the moderate Islamist party Ennahda, which is close to Egypt’s Muslim Brotherhood and heads Tunisia’s coalition government.

But it has still failed to adopt a new constitution, due to a lack of consensus among MPs, with the first reading of the draft charter on Monday degenerating into chaos.

The National Assembly has also been repeatedly criticised for its inefficiency and the non-attendance of members.

In Egypt, the grassroots movement Tamarod (rebellion in Arabic) mobilised millions of people for four days of protests which resulted in the army deposing president Morsi on Wednesday.