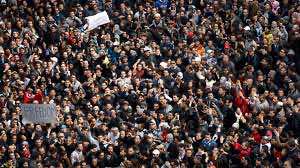 The Arab world has experienced major upheavals since late 2010, with two presidents fallen in Egypt, Syria mired in civil war and Tunisia and Libya going through difficult transitions:

Islamist Mohamed Morsi, the first democratically elected head of state in Egypt, was ousted by the military on Wednesday after a tumultuous single year in office marked by crises and major protests.

Thousands of Egyptians had called for him to stand down, in protests which were unprecedented since the 18 days of demonstrations that preceded the February 2011 resignation of Hosni Mubarak.

While Mubarak, who had himself come from the military, handed over power to the military of his own accord, in Morsi’s case it was the army which took the initiative and handed interim power to the head of the Supreme Constitutional Court Adly Mansour pending early presidential elections.

On Thursday Mansour was sworn in as president, and the main leaders of the Muslim Brotherhood were arrested.

Tunisia, which touched off Arab Spring revolutions across the Arab world, is now ruled by an Islamist-dominated coalition.

On January 14, 2011, veteran strongman Zine El Abidine Ben Ali, in power since 1987, fled for Saudi Arabia following a popular uprising prompted by the fatal self-immolation of a young man in dire economic straits.

Months afterwards, in October 2011, a National Assembly was elected, dominated by the moderate Islamist party Ennahda. Moncef Marzouki, a fierce opponent of Ben Ali, was elected president by the parliament.

But parliament has still failed to adopt a new constitution, because of a lack of consensus among MPs, and the country is regularly shaken by political crisis, social conflict and the expansion of radical Islamist groups.

President Bashar al-Assad’s regime is battling its own domestic uprising, which began with peaceful protests in March 2011 and became a bitter civil war after a bloody crackdown on dissent.

A Syrian watchdog says more than 100,000 people have been killed since the uprising erupted.

Over the past few weeks, rebels have lost ground to regime troops which are backed by fighters from the Lebanese Shiite group Hezbollah.

After retaking the key town of Qusayr, regime troops backed by Hezbollah have launched an offensive on the central city of Homs and the army continues to bombard the capital Damascus and its outskirts.

After dictator Moamer Kadhafi was killed in October 2011 following a rebel revolt backed by NATO air power, the new transitional authorities are battling to establish military and security institutions capable of restoring law and order and state authority in the face of armed militias.

Several attacks on security forces and Western interests have taken place over the past few months.