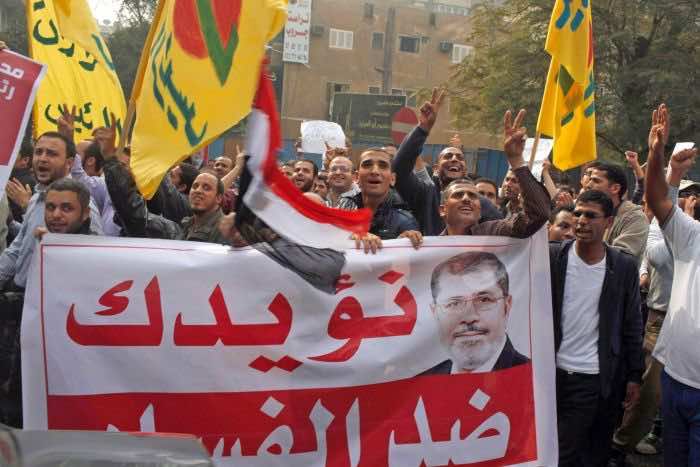 Anger gave way to gloom on Thursday as Islamists rallied at a Cairo mosque where thousands of supporters of deposed president Mohamed Morsi said they felt under siege and betrayed by the army.

Pictures of the ousted leader hung on walls, as protesters chanted against the military that removed Morsi from his post and outlined a roadmap for a political transition.

Inside the hall of the mosque, members of his ousted government and the leadership of his Muslim Brotherhood huddled together, planning their next moves and vowing not to deal with the new leaders.

He slammed the army’s removal of Morsi as “thuggery” and a violation of democratic principles.

Morsi was Egypt’s first freely elected president. But his opponents accused him of betraying his promise as a president for all Egyptians by concentrating power in the hands of Islamists.

Millions took to the streets to call for his resignation, but his supporters said he should have been allowed to see out his term and be removed only through future elections.

“President Mohamed Morsi is the elected legitimate Egyptian president. They imposed a new reality with force but legitimacy is on our side,” said Brotherhood spokesman Ahmed Aref.

Outside the mosque, chants thundered against the military.

“Down with military rule!” they chanted, calling for an Islamic state. In a statement read out to the Morsi supporters, the Brotherhood called for”peaceful protests” on Friday to defend Morsi’s legitimacy.

“I’m ready to die for legitimacy, for my religion,” said one student of medicine, carrying a shroud in a symbolic gesture.

Tents were pitched and street vendors sold food as the protesters settled in for the long haul.

“It’s a soft military coup. The military was smart, using the cover of civilians,” said Ahmed al-Sayyed, 26, in reference to the mass anti-Morsi protests the military used to justify their move.

“I was hoping to see an Islamic state in Egypt, but they aborted this dream,” he added.

News of the arrests of Brotherhood leaders and the closure of Islamist television stations was a painful reminder for Morsi’s supporters of the dramatic end to his turbulent year in power and their place in Egyptian politics.

“During all his time in power, Morsi never closed down one television channel. They closed down six channels in just one hour,” said protester Ahmed Ali.

Morsi’s government unravelled late on Wednesday after the army gave him a 48-hour ultimatum in the wake of massive demonstrations since June 30 against his tumultuous rule.