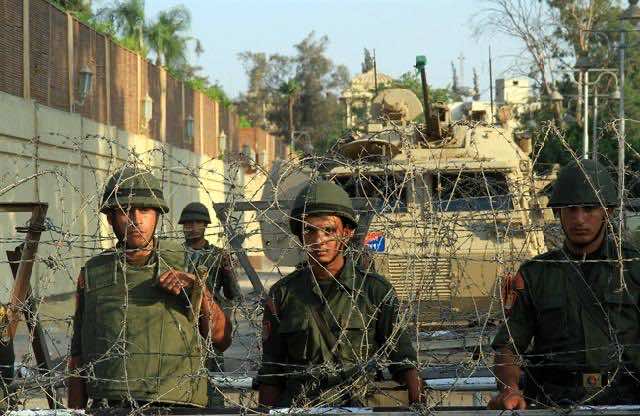 With its popularly supported overthrow of president Mohamed Morsi, Egypt’s army has placed itself at the forefront of a difficult transition fraught with the risks of confronting the Islamist’s backers.

The military has announced a roadmap that includes the suspension of the constitution and appointment of the country’s top judge Adly Mansour as interim president with a vague mandate ahead of new elections.

But it is military chief Abdel Fattah al-Sisi, also the defence minister appointed by Morsi, who will call the shots.

The armed forces had previously ruled the country, in between the Arab Spring uprising that toppled longtime strongman Hosni Mubarak in February 2011 and Morsi’s election about 16 months later.

Back then, Mubarak’s defence minister, Field Marshal Hussein Tantawi, headed the army in a tumultuous, violence-stricken transition that damaged the military’s standing in society.

This time around, however, the generals have set out to avoid a repeat that pattern, which sapped both its popular support and its officers’ morale, commentators say.

“I think the new military leaders do not want to make the SCAF’s mistakes at the time,” said political analyst Hala Mostafa, referring to the Supreme Council of the Armed Forces.

“The main difference is that this time, there is popular support” for its roadmap, she said.

The military overthrew Morsi on Wednesday after millions of protesters rallied to demand the Islamist leader quit for failing the 2011 revolution and bolstering his Islamist base at the expense of the rest of the country.

General Sisi made a fine point of mustering opposition and religious leaders to appear beside him during his televised address on Wednesday night to announce Morsi’s removal.

His plan has been backed by Mohamed ElBaradei, the former head of the UN nuclear watchdog, Coptic Christian Pope Tawadros II and the head of Al-Azhar, Sunni Islam’s highest seat of learning.

But some still have their doubts given the experience of the military’s handling of the post-Mubarak transition, during which opposition protests were quashed.

“Somehow Egyptians have magically forgotten the series of human rights violations that the army has conducted in the name of ‘stability’ and ‘productivity’ as well the many marches and protests that took place, calling for the army to return to its barracks,” wrote columnist Thoraia Abou Bakr in the English-language Daily News Egypt newspaper.

“This time, it will be different,” they tell me, “The army does not want to rule.”

A military crackdown in which the top leadership of the Brotherhood has been rounded up may also prolong the climate of tension and violence that undermines Egypt and weighs heavily on the economy.

“The forceful removal of the nation’s first democratically elected civilian president risks sending a message to Islamists that they have no place in the political order,” said the International Crisis Group.

This, the Brussels-based ICG added, would sow “fears among them that they will suffer yet another bloody crackdown; and thus potentially prompting violent, even desperate resistance by Morsi’s followers.”

Morsi’s ouster has been followed by a wave of arrests in the ranks of the Muslim Brotherhood, including that of influential Islamist movement’s supreme leader, Mohammed Badie.

The deposed president, who launched a last-ditch appeal on Wednesday to denounce the “coup”, was himself in military detention.

Since the fall of the monarchy in 1952, the army has held an important place in Egypt, although it has often preferred to act behind the scenes.

It provided Egypt with all of its presidents — Mohammed Naguib, Gamal Abdel Nasser, Anwar Sadat, and Hosni Mubarak — until the election of Morsi, a civil engineer by training.