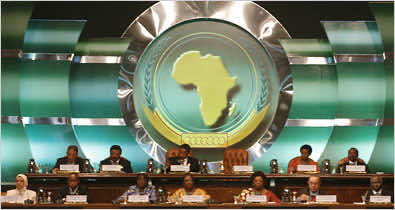 The African Union suspended Egypt from the continental body Friday after the ouster of president Mohammed Morsi, in line with its strict rules against unconstitutional changes of government.

The AU’s Peace and Security “council decided to suspend the participation of Egypt in AU activities until the restitution of constitutional order”, said an official statement.

The pan-African bloc met Friday at AU headquarters in the Ethiopian capital to discuss the political crisis in Egypt, following Morsi’s removal by the army on Wednesday.

“The council reiterates the AU’s condemnation and rejection of any illegal seizure of power,” the statement added.

“The overthrow of the democratically elected president does not conform to the relevant provisions of Egypt’s constitution, and therefore falls under the definition of an unconstitutional change of government.”

Ahead of the meeting, AU Commission chief Nkosazana Dlamini-Zuma stressed its “principled position” on such changes of government.

However, Mohamed Edrees, Egyptian ambassador to the AU, said ahead of the decision that “the voice and the call of tens of millions of Egyptians must be heard, understood and respected”.

Speaking Friday before the suspension, Edress said that Egypt wanted to maintain its role in the AU and “continue to take part in this family”.

“The military role is to support the people, their role is not to instigate a coup,” Edress added.

“Since the start of the Arab spring, it posed a challenge to the instrument of the African Union. The AU, at that time, the council decided that what happened in Egypt was a popular revolution and it dealt with it accordingly.”

The bloc has previously suspended members which broke its rule of unconstitutional changes of government, most recently in March when it suspended the Central African Republic after rebels seized power.

Madagascar and Guinea-Bissau are also suspended.