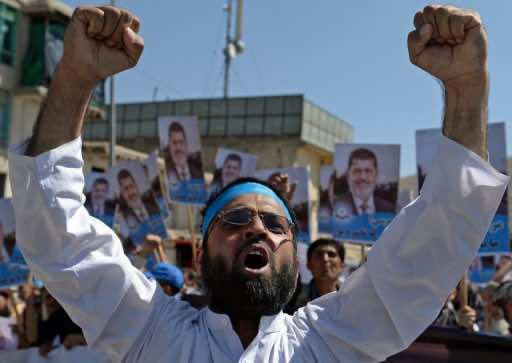 More than 200 Afghans staged a noisy protest in Kabul on Friday in support of ousted Egyptian president Mohamed Morsi, whose Islamist regime was thrown from power after mass demonstrations and army intervention.

The protesters took to the streets of the Afghan capital after Friday prayers, chanting pro-Morsi slogans, waving a large Egyptian flag and demanding the president’s reinstatement.

“Shame on the Egyptian army, Morsi we are with you,” the crowd chanted as they walked from Kabul’s main central mosque to another nearby mosque, carrying posters of the former president and placards condemning secularism.

“I am not afraid to die for our Muslim brothers there, and in support of President Morsi,” said Mohammad Nabi Ahmadzai, aged 30.

Scores of anti-riot police forces watched over the protest, which passed off peacefully.

“This is a conspiracy of secularists and we want to show the world that we are not afraid to defend Islam anywhere,” said Jawed Mangal, one of the demonstrators at the rally that was organised by a Muslim youth group.

Egyptian armed forces ousted Morsi on Wednesday after just a year in power, installing a temporary civilian government, suspending the constitution and calling for new elections.

Protestors in Afghanistan, a strictly conversative Islamic country, accused the Egyptian army of being a Western institution controlled by secularists.

“We want our Afghan army and police to fully follow Islam and reject any Western ideology,” one speaker at the protest said.