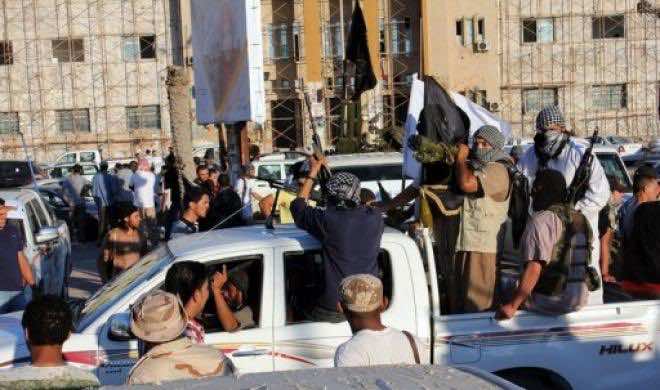 Residents of Cairo’s Manial neighbourhood were recovering Saturday from a bloody night of clashes with armed supporters of the Muslim Brotherhood who killed at least seven people and left dozens injured, they told AFP.

The violence erupted when residents tried to stop hundreds of Islamists passing through Manial to reach protests being staged in the iconic Tahrir Square against toppled president Mohamed Morsi, who hails from the Muslim Brotherhood.

“The Brotherhood attacked the area with all kinds of weapons,” said resident Mohammed Yehya, who lost three of his friends in the mayhem.

Inhabitants of the Nile island of Manial reported seeing dozens of bearded Islamists armed with machineguns, machetes and sticks on Friday night before the deadly clashes broke out.

Snipers were spotted on rooftops, and medics told AFP they treated some residents of the normally quiet middle-class neighbourhood for bullet wounds with a downward trajectory.

Buildings were pockmarked with bullet holes. Rocks carpeted the floor and charred tyres showed the ferocity of the violence.

The clashes in Manial and other parts of the country came two days after the army toppled Morsi, underlining the determination of his Muslim Brotherhood to disrupt the military’s plan for a political transition until new elections.

“The attack came minutes after Badie’s speech. They treated us like infidels. They were chanting ‘Allahu akbar’ (God is greatest) as they were shooting us,” said Ahmed Fattouh.

On the door of one shop hung a sign announcing that the owner, 26-year-old Abdallah Sayyed Abdelazim, had been killed.

Parts of Manial were a ghost town on Saturday, with businesses shuttered and residents devastated by the night’s violence.

“The clashes started at 7:30 pm and continued until three in the morning. Their ammunition just didn’t run out. They are trying to terrorise us and take over the country,” said Khaled Tawfik.

Shopkeeper Mohammed Fekry, 29, who was wounded by birdshot said at least 10 people were killed and dozens injured.

“We have 10 people dead in this area, including six people who died with single bullets in the head. There were snipers on the roof of the Salaheddine mosque,” Fekry said.

Hundreds of Brotherhood supporters, he said, had come from Cairo University — where they had been camped out for days to defend Morsi’s legitimacy — with “automatic weapons, machineguns, knives, swords”.

They were headed to Tahrir Square, where anti-Morsi protesters had gathered, but the Manial residents tried to prevent their passage.

Hend Taha said she saw the clashes from the window of her apartment.

“There were bearded snipers on top of Salaheddine mosque. On the ground, lots of bearded men coming from the direction of Cairo University were marching with automatic weapons,” she said.

The overall toll for Friday’s violence across Egypt was 30, but casualties are likely to rise.

Ihab al-Sayyed, a doctor at Qasr al-Aini hospital, told AFP that seven people he treated for injuries from the Manial clashes had died.

“I think the death toll will be much higher.  “The injuries were all from live bullets, most of them automatic weapons.

Three of the dead and dozens of the injured were shot at from a height,” the doctor said.