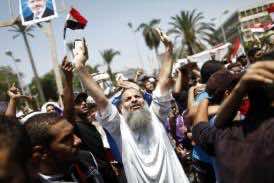 Thousands of supporters of Egypt’s Muslim Brotherhood paid their respects on Saturday to four members of the movement killed in 24 hours of clashes during protests against the ouster of their president.

Violence linked to the political crisis has cost the lives of at least 37 people and injured more than 1,400 across the deeply divided North African nation, official sources say.

The Islamists gathered for mass prayers on Saturday after a call for a new round of demonstrations to demand that the army restore Mohamed Morsi three days after the military toppled him in a popularly backed coup.

The imam told tearful mourners gathered outside Rabaa al-Adawiya mosque in the Cairo neighbourhood of Nasr City, where the Islamists have been camped for the past 10 days, to pray for the “martyrs of legitimacy”.

Wearing green headbands, Islamists in their thousands, including many women wearing the full veil, waved Egyptian flags and pictures of Morsi.

Morsi, who has been in detention since overnight on Wednesday, had issued a defiant call for supporters to protect his elected “legitimacy”, in a recorded speech aired hours after his removal that day.

Saturday’s funerals come after a gun battle between soldiers and Morsi supporters outside the Cairo headquarters of the Republican Guard on Friday killed four demonstrators, the official MENA news agency reported.