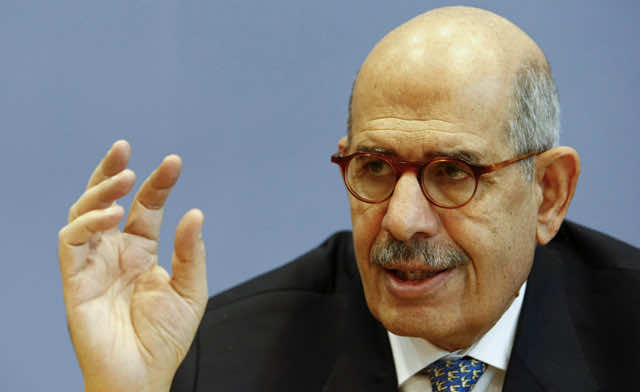 Nobel Peace laureate Mohamed ElBaradei tops the list of candidates for premier to lead Egypt out of its crisis, the presidency said Saturday, after bloodshed followed the ouster of the country’s first freely elected head of state.

The Tamarod movement, which engineered mass protests culminating in the overthrow of Islamist president Mohamed Morsi on Wednesday, said ElBaradei had been appointed after talks with Egypt’s new caretaker leader.

State news agency MENA and other official sources confirmed the appointment, but a presidential aide said later that a prime minister had yet to be named, while adding ElBaradei “is the logical choice”.

“ElBaradei is the strongest candidate,” presidential advisor and spokesman Ahmed al-Muslimani. “He is on top of the list of names” under discussion, he said.

A source close to the negotiations told AFP that various camps that agreed to the military’s roadmap for a political transition were still trying to convince the Salafist Al-Nour Party to back ElBaradei.

The initial reports of ElBaradei’s appointment had been greeted with cheers in Cairo’s Tahrir Square and Ittihadiya presidential palace, where opponents of Morsi set off firecrackers, frantically waved Egyptian flags and honked car horns.

They came as the Muslim Brotherhood staged a new show of force to demand the military restore Morsi to power, after dozens of people died and hundreds more were injured in 24 hours of violence.

Tamarod, the grassroots protest movement which has called for demonstrations on Sunday to counter the Islamists, had nominated ElBaradei to represent it in negotiations with the military.

ElBaradei, 71, won the Nobel Peace Prize in 2005 for his work as the head of the International Atomic Energy Agency.

He returned to Egypt in 2010 and became a prominent opponent of Hosni Mubarak in the lead-up to the 2011 uprising that overthrew the veteran strongman.

Aya Hosni, a member of Tamarod’s central committee, told AFP that “the interim president and Tamarod had agreed on Mohamed ElBaradei’s nomination as prime minister”.

The appointment came as an Islamist protest to demand the reinstatement of Morsi petered out at nightfall, following 24 hours of ferocious violence that left 37 people dead and over 1,400 injured.

The imam told mourners gathered outside Cairo’s Rabaa al-Adawiya mosque, where the Islamists have camped for the past 10 days, to pray for the “martyrs of legitimacy”.

Wearing green headbands, Islamists in their thousands, including many fully veiled women, waved Egyptian flags and pictures of the deposed president.

Morsi, who has been in detention since overnight on Wednesday, had issued a defiant call for his supporters to protect his elected “legitimacy”, in a recorded speech aired hours after his removal.

Residents of one Cairo district reported that bearded Islamists armed with machineguns, machetes and sticks clashed with them as they passed through their district overnight.

“The Brotherhood attacked the area with all kinds of weapons,” said

Mohammed Yehya, who said he lost three friends in the mayhem.

His claim could not be verified, but many other residents gave similar accounts.

In response, a spokesman for the Brotherhood’s Freedom and Justice Party told AFP: “Not everyone with a beard belongs to the Muslim Brotherhood.”

The bloodletting continued on Saturday with gunmen killing a Coptic Christian priest in the restive north of the Sinai peninsula, security souces said.

That came after armed Morsi supporters stormed the provincial headquarters in the Sinai town of El-Arish and raised the black banner of Al-Qaeda-inspired militants on Friday night, an AFP correspondent reported.

Morsi’s single year of turbulent rule was marked by accusations he failed the 2011 revolution by concentrating power in Brotherhood hands and letting the economy nosedive.

President Barack Obama meanwhile insisted the United States was “not aligned” with any political party or group in Egypt following Morsi’s ouster.

Obama, who spoke with members of his National Security Council via conference call about the situation in Egypt, “condemned the ongoing violence across Egypt and expressed concern over the continued political polarization,” according to a White House statement.

“The United States categorically rejects the false claims propagated by some in Egypt that we are working with specific political parties or movements to dictate how Egypt’s transition should proceed,” it said.

“The future path of Egypt can only be determined by the Egyptian people.”

The United States also echoed UN chief Ban Ki-moon in calling for a peaceful end to the crisis.

“We call on all Egyptian leaders to condemn the use of force and to prevent further violence among their supporters,” said the State Department.

But Republican Senator John McCain called for a suspension of US military aid to Cairo because Egypt’s army had “overturned the vote of the people”.

A judicial source said the prosecution would question Brotherhood members, including Morsi, for “insulting the judiciary”.

Coincidentally, Mubarak appeared in court on Saturday when his retrial for alleged complicity in the killings of protesters in 2011 resumed.

The 85-year-old appeared in the dock behind bars, wearing dark sunglasses and a white prison uniform. His trial was adjourned until August 17.