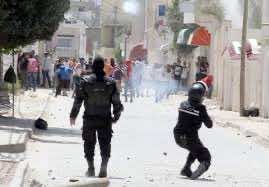 Tunisia’s public prosecutor Monday ordered police to investigate an attack on 19 actors by Salafist Muslims, while they decided whether to charge the artists with alleged “indecency”, a lawyer for the drama group said.

“The public prosecutor decided …to allow the investigation to progress so that police officers could hear the artists’ statements as victims,” their lawyer Ghazi Mrabet said.

The actors had been due to appear before the public prosecutor on Monday, and were expected to be charged with indecency.

Mrabet added that the prosecutor had not yet decided whether or not to press charges against the members of the theatre troupe.

“The artists should receive a summons from the police now,” he said.

The group was putting on a performance in the western town of Kef in a small theatre and in the street when ultra-conservative Salafist Muslims attacked them.

Supporters of the actors said that police had not bothered the Salafists, while they arrested the artists and asked for them to be prosecuted for indecent behaviour, a charge that carries a sentence of up to six months in prison.

Police have not made their statements available to the actors’ defence lawyers, so the exact nature of what they are accused of remains unclear.

The performance in question was organised to raise funds for a local theatre in Kef damaged in an arson attack.

Police said the performance was also a tribute to anti-Islamist MP Chokri Belaid, who was assassinated in February by suspected Salafists. Entertainers are frequent targets of Salafists.

Last week a Tunis court freed on appeal a rapper who had been jailed for two years for a song in which he insulted the police.

Tunisia’s Islamist-led government has been accused by critics of seeking to curb civil liberties won in the popular uprising that overthrew veteran strongman Zine El Abidine Ben Ali in January 2011.