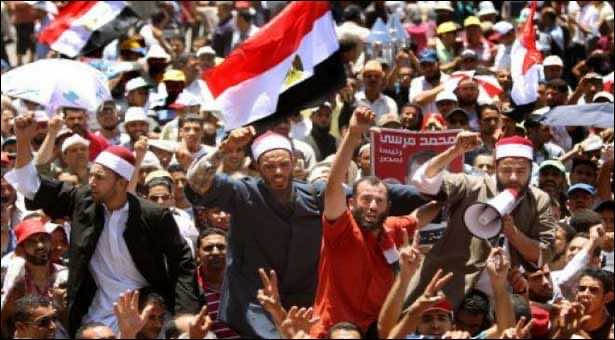 A Muslim Brotherhood call for an uprising in response to a “massacre” of its supporters after the military’s ouster of Islamist president Mohamed Morsi could mark a bloody new stage in the turmoil rocking Egypt, analysts warn.

At dawn today, after days of deadly violence and rising tensions  between the Islamists and those who had called for Morsi’s departure, the  Brotherhood said security forces killed dozens of its supporters during prayers  outside an army headquarters in Cairo.

Afterwards, the Brotherhood’s political arm, the Freedom and Justice Party,  called for “an uprising” against those trying to “steal their revolution with  tanks”.

And the movement likened army chief Abdel Fattah al-Sisi, the general  behind Morsi’s ouster, to Syrian President Bashar al-Assad, saying he wanted “to take Egypt in the same direction as Syria” and rule from behind the scenes.

“The Muslim Brotherhood are adopting a very dangerous attitude. They are  insisting on escalating the situation,” said Hassan Nafaa, professor of  political science at Cairo University.

He branded the Brotherhood leadership “extremists” and called on the  moderate wing within the movement to pressure them into restraint.

“Emotions are very high, and there is real anger on the streets,” Nafaa  warned.

Today’s was the latest in a wave of violence since Morsi’s ouster that has  left scores dead nationwide, including at least 37 following Islamist rallies  on Friday, and despite talk of peaceful protests.

Gunmen killed a Coptic priest there on Saturday, while other militants shot  dead a police officer.

“There is a danger that some of them may resort to terror. If the army does  not guarantee security, what is happening may make us wish for our dictators,”  Kassem said, alluding to Hosni Mubarak, the Egyptian autocrat ousted in a  popular uprising in February 2011.

Like others, he argued that inflammatory language being used by the  Islamists had stoked the unrest.

But he said there was currently no reason to fear the deteriorating  security situation would drag Egypt in the same direction as Syria, where more  than two years of conflict has killed more than 100,000 people.

“Here we have a professional army that refused to fire on its people. When  Morsi ordered them to rein in the country they refused.”

Another scenario that events in Egypt have prompted media references to is  the one that arose in Algeria in the early 1992 when the army decided to cancel  elections that an Islamic party was poised to win.

The decision sparked almost a decade of appalling bloodletting, with some  200,000 people killed in fighting that pitted Islamist insurgents against the  military and took a particularly heavy toll on civilians.

“In Algeria it was a real dream (to elect an Islamist government). It was a  theoretical alternative. But in Egypt the Islamists stayed in power for one  year and the people were suffering at the end of it,” said Egyptian political  analyst Amr el-Shobaki.

He was referring to the widely held belief among the millions who marched  last week calling for his ouster that Morsi failed to improve the lives of  ordinary Egyptians during his year in power.

Morsi’s turbulent rule was marked by accusations he failed the 2011  revolution by concentrating power in Islamist hands and letting the economy go  into freefall.

But while discounting violence of the kind that devastated Algeria, Shobaki  called some of the language used by the Brotherhood’s leaders “shocking”.

He warned that some of them were manipulating Islamist youths, which “could  lead towards violence”.    “It is a danger,” he said.

In the immediate future there has been speculation that the holy Muslim  fasting month of Ramadan, which starts this week, might help calm the situation  by encouraging protesters to stay at home.

“The situation is so complicated right now that I don’t think it will make  any difference,” said Kassem.