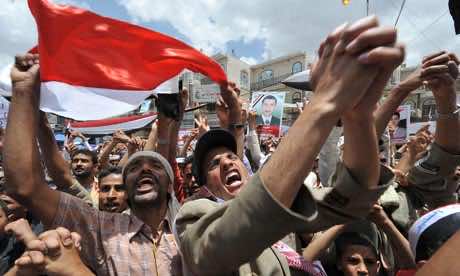 Thousands of people protested in the Yemeni capital on Monday against the Egypt military’s ouster of Islamist president Mohamed Morsi, the country’s first elected leader in decades.

“We are with legitimacy,” read a banner carried by the protesters who marched towards Cairo’s embassy in Sanaa, waving Egyptian flags.

The protest came in response to calls from Yemen’s influential Islamist and tribal Al-Islah (reform) party.

It is close to the Muslim Brotherhood from which Morsi hails, and is well represented in the Yemeni government.

Relations had been cold between Saudi Arabia and Morsi’s government, since his presidential election win after a popular uprising overthrew Riyadh’s ally, former strongman Hosni Mubarak.

The Qatar-backed Muslim Brotherhood, which has millions of followers, is eyed with much suspicion by Saudi Arabia and the United Arab Emirates.

Yemen itself was the scene of an Arab Spring-inspired uprising, in which Al-Islah played a key role.

That led to the ouster of former president Ali Abdullah Saleh in a UN-backed deal mainly brokered by Saudi Arabia, which has traditionally strong ties with both sides.