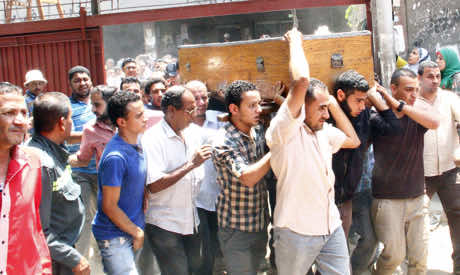 The Muslim Brotherhood, which has led demonstrations against Wednesday’s overthrow of Islamist president Mohamed Morsi, said its supporters were “massacred” by troops and police during dawn prayers in Cairo.

The military blamed “terrorists” while witnesses, including Brotherhood supporters at the scene, said the armed forces fired only warning shots and tear gas, and that “thugs” in civilian clothes carried out the shootings.

Condemnation poured in, with Germany expressing “shock” at the violence, Turkey calling it an attack on “humanity” and Brotherhood backer Qatar urging “self-restraint” and “unity”.

Grand Imam Ahmed al-Tayyeb of the Cairo-based Al-Azhar, Sunni Islam’s highest seat of learning, said he would “remain in seclusion” in his house until the bloodletting ends “and those behind it take responsibility”.

The army-appointed interim president, Adly Mansour, set up a judicial commission of inquiry into the killings.

The conservative Islamist Al-Nur party, which won almost a quarter of the votes in 2011-2012 parliamentary elections and had backed the army’s overthrow of Morsi, said it was pulling out of talks on a new government in response to the “massacre”.

The bloodshed happened outside the headquarters of the elite Republican Guard, which the Brotherhood accuses of betraying Morsi, Egypt’s first freely elected president.

Islamists hurled stones at the security forces who responded with tear gas, as firefighters battled to extinguish a blaze in an apartment block.

“Morsi supporters were praying while the police and army fired live rounds and tear gas at them,” said the Brotherhood.

Chaos ensued as people searched for the names of missing loved ones on a list of the dead in hospital, where dozens of bodies were laid on the bloody floor of a makeshift morgue.

The army said “armed terrorists” tried to storm the base, killing one security officer and critically wounding six.

It later warned it would not allow anyone to threaten national security, reiterated a call for protesters to stay away from military installations and urged them to end their sit-ins.

A security official said prosecutors later ordered the closure of the FJP’s Cairo headquarters after police discovered weapons they alleged would be used against Morsi opponents.

The bloodshed came just hours before caretaker president Mansour had been due to announce his choice of interim prime minister.

It followed another day of duelling demonstrations across the Arab world’s most populous nation in an escalating crisis some fear could spark extremist attacks.

“They are attempting to reverse the situation by creating panic,” analyst Hisham Kassem said of the Brotherhood.

“There is a danger that some of them may resort to terror. If the army does not stand firm, what is happening may make us wish for our dictators.”

The military, which overthrew Morsi after millions took to the streets on June 30 demanding that he resign, has come under mounting international pressure to swiftly install a civilian administration to oversee a rapid return to elected government.

But Al-Nur said it would no longer take part in talks on such an administration “in response to the massacre outside the Republican Guard,” its spokesman said on Twitter.

The party had already voiced strong opposition to the appointment of prominent liberal leader Mohamed ElBaradei as interim premier, delaying efforts to form a caretaker government.

Mansour aides had said before the latest violence that he was leaning towards appointing centre-left lawyer Ziad Bahaa Eldin as premier with ElBaradei as vice president, and that an announcement would be made on Monday.