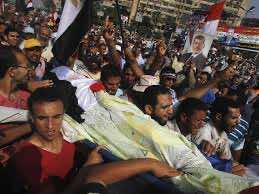 Emotions ran wild on Monday near an elite military base in Cairo outside which at least 51 people were gunned down in a dawn attack on supporters of ousted Islamist president Mohamed Morsi.

As pitched battles raged on Salah Salem, a boulevard where Morsi supporters hurled rocks at a security forces behind a cordon of barbed wire, people searched for the names of their loved ones at a hospital a few hundred metres (yards) away.

Dozens of bodies were laid on the bloody floor of a makeshift morgue.

The bloodshed occurred outside the headquarters of the elite Republican Guard, which the Brotherhood accuses of betraying Morsi, Egypt’s first freely elected president who was ousted in a popularly backed military coup last Wednesday.

Tears flowed freely as doctors operated on a bullet wound in a man’s stomach at a field hospital set up at Rabaa al-Adawiya mosque, where Morsi supporters have been staging a mass sit-in for the past 12 days.

“This is a T-shirt belonging to my friend who died,” said Ahmed Mansour, holding up the blood-soaked piece of clothing.

“The police shot us with birdshot,” said Aymen Sayyed, whose face was still smeared with blood.

In addition to the 51 dead, the emergency services said more than 430 people were wounded, and some patients at the field hospital were covered in
bandages.

Outside on Salah Salem, on the main route between the mosque and the Republican Guard headquarters, the stench of blood was mixed with tear gas.

Debris was scattered all along the boulevard, which was lined by cars with smashed windscreens, punctuated by thick black smoke billowing from burning tyres and trees.

On the walls of the nearby defence ministry building, slogans denounced army chief Abdel Fattah al-Sisi, the general behind Morsi’s overthrow.

“This will soon be the headquarters of the Islamic republic,” said some of the graffiti, which also called for Sisi’s execution.

Armoured vehicles closed off all streets leading to the area, as members of the security forces fired shots into the air to stop the Islamists from getting too close.

“The Republican Guard shot us while we were praying,” charged Ayman Ibrahim.

Shaimaa Younes also said the Islamists were fired at as they worshipped, countering claims by the military that “armed terrorists” tried to storm the base.

“We were praying at dawn in rows and, as we bowed down, the Republican Guard fired at us. Then there was chaos and people were falling into pools of blood.”

Others told a different story.

“The thugs of the national security (police) started firing at us while we were praying at dawn,” said Anas Ayman.

“They hid behind police vehicles, and we tried to get the army to protect us but they started shooting as well.”

Another man, Hussein, said: “The thugs… started firing birdshot heavily, then the army fired tear gas, and we were stuck between the fire and the gas.”

“Thugs started shooting and the army also began shooting. There was chaos. I lost all my belongings.”

Ambulances were everywhere, but private cars also ferried casualties to the field hospital.

Pro-Morsi protesters then started breaking up the pavement and formed a barricade between themselves and the army.

They threw rocks at the army over barbed wire, and the armed forces responded with tear gas.