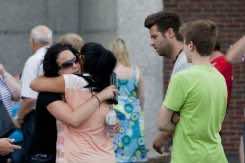 The death toll from the massive explosion caused by a runaway oil tanker train that derailed and flattened part of a small Canadian town has risen to 13, a coroner said Monday, and dozens more remain missing.

Confirmation of eight further deaths in Lac-Megantic, in Quebec province, came as environmental officials warned that around 100,000 liters of oil spilled in the disaster was headed for the Saint Lawrence seaway.

With the coroner stating that the official toll had more than doubled from the previous count of five, police at a joint press conference said around three dozen people are still missing.

Officials have said they expect the death toll to rise further given the many people yet unaccounted for.

As many as 1,500 Lac-Megantic residents have been holed up at emergency shelters or staying with friends and family.

This represents “the vast majority of residents that were evacuated,” added a Quebec public safety official. They “will be allowed to go back to their homes.”

About 500 people are already believed to have returned home after the smoldering debris cooled and a widening area was declared safe, the official said.

Firefighters put out the inferno late Sunday after it had destroyed a two-square-kilometer (0.77-square-mile) area of the picturesque lakeside village.

The freight train operated by Montreal, Maine & Atlantic Railway derailed and exploded early Saturday, unleashing a wall of fire that tore through homes and businesses in Lac-Megantic — population 6,000.

The fire leveled more than four blocks, including 30 buildings, and forced about 2,000 to flee the town, which is located 250 kilometers (155 miles) east of Montreal, near the US border.

Firefighters needed more than 18 hours to contain the inferno, the cause of which is under investigation.

Survivors described an inferno as the runaway black tanker cars jumped the tracks, just as dozens of people were enjoying a summer night out in downtown bars and restaurants.

Montreal, Maine & Atlantic Railway said in a statement that the train had been transporting 72 carloads of crude oil when it derailed.

Rail company spokesman Christophe Journet told AFP the train had been stopped in the neighboring town of Nantes, around 13 kilometers west of Lac-Megantic, for a crew changeover.

For an as yet unknown reason, Journet said, the train “started to advance, to move down the slope leading to Lac-Megantic,” even though the brakes were engaged.

There was no conductor on board when the train — en route from the US state of North Dakota to a refinery in Canada’s eastern New Brunswick province — crashed, he said.

The company speculated that a temporary “shutdown” of the train in Nantes after a small engine fire “may have resulted in the release of air brakes on the locomotive that was holding the train in place.”

Investigators from the Transportation Safety Board of Canada examined the locomotive on Sunday and the train’s equivalent of a plane’s “black box” recorder has been located.

Air quality tests showed no risk to the public, as locals waited in long lines Monday morning to retrieve pets, medications and a change of clothes from those homes still standing in the cordoned-off disaster zone.

Officials said they are mostly concerned about possible contaminants in the soil, while the derailment has also put the spotlight on the challenges of transporting oil by rail.

Construction of new pipelines — hotly opposed by environmental activists — has been unable to keep up with surging North American oil production, and so crude is largely being shipped by rail.

According to the Canadian Railway Association, oil shipments jumped from 500 tanker cars in 2009 to 140,000 so far this year.

Quebec’s environment ministry is monitoring a thin oil slick that stretched nearly 100 kilometers from Lac-Megantic along the Chaudiere River at the start of the day.

Spokesman Eric Cardinal estimated that 100,000 liters of oil spilled into the river.

By 4 p.m. local time (2000 GMT) the crude had reached the town of Saint-Georges, less than 100 kilometers from Quebec City where the river flows into the Gulf.

It is “just a matter of hours” before the oil reaches the seaway, which connects the Great Lakes to the Atlantic Ocean, Cardinal said.