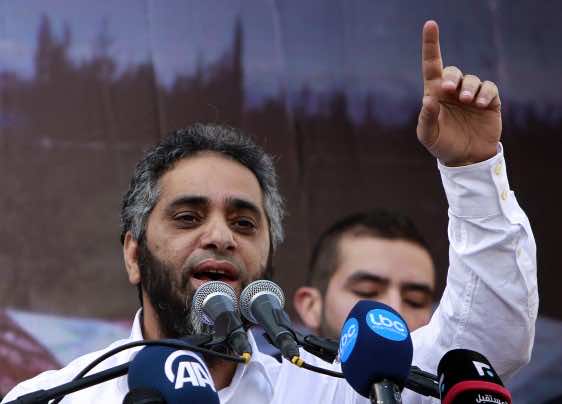 Fadhel Shaker, the former big-name Lebanese singer, was sentenced to death in absentia on Monday by his country’s military court, according to the Lebanese news website Annahar.

In a video on YouTube Fadhel Shaker had admitted murdering two soldiers and injuring four, during bloody events in Lebanon. The former singer is reported to have formed alongside his brother Abdel Rahman, a militia that targets the Lebanese army and Hezbolllah.

After the siege of Ahmad el-Assir’s mosque by the Lebanese army in 2012, Fadhel Chaker took the arms alongside supporters of Sunni Imam Ahmad el-Assir against the army.

Fadhel Chaker had allegedly threatened to kill Samih el-Zein, the president of the municipality of the city of Sidon in June 2012:

“I’ll kill you next time I see you. I consulted my Sheikh (Ahmad al-Asir) who supports me and I’ll kill you soon,” Fadhel Chaker had told Samih el-Zein, as quoted by Huffpostmaghreb.

Prior to 2012, Fadhel Shaker’s became one of the most acclaimed artists throughout the Arab world. The Lebanese pop star’s music embraced fame since the release of his album Walah Zaman in the 1990s.

In Morocco, Fadhel Shaker’s music was an artistic paradigm and his performance in 10th edition of Mawazine Festival attracted a large number of fans.

He was known as a shy person and a very sensitive artist with an amazing voice. He participated in most famous Arab festivals and had a huge number of fans all over the Arab world.

However, Fadhel Shaker’s inclination to politics was also discernible in his exploitation of the 10th edition of Mawazine to voice his opposition to Bashar Al Assad.

“Allah yakhdu” he said during the concert, which means May God take him away, referring to Bashar Al-Assad.

Fadel Shaker was shot kissing the head of Sheikh Ahmad al-Assir during an anti-Assad Salafi rally in Beirut on Sunday March 4, 2012.

As to his fervent religious activism, the first sparks appeared when rumors of him denouncing art and music prior to his performance in Mawazine were seen as foreshadowing his recent actions in the name of religion.