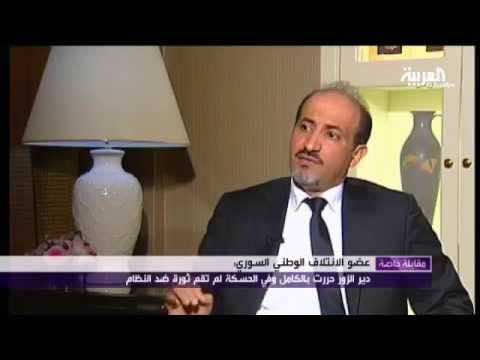 Jarba is a tribal figure from the eastern province of Hasaka who has connections with Saudi Arabia. He defeated businessman Mustafa Sabbagh, Qatar’s point man in the opposition. An opposition website, “Alhakeka”, published news saying Jarba has spent 3 years in Adraa prison south Damascus because of a drug dealing case, but we couldn’t verify this news from independent sources.

During Saturday’s vote, the 114 members of the coalition also elected three vice presidents — Suheir Atassi, Mohammed Farouk Tayfur and Salim Muslit, according to AFP. But this election for the Syrian people was more of a fine tradition because they don’t care about the results.

I don’t think anything will change; in fact this election was used to bring someone into power that was beneficial to regional powers and not to serve the case. These people are disconnected, Jamil Salim an activist from Aleppo told me via Skype.

Also some members of the coalition say the divisions are caused by competition for influence among regional supporters of the opposition. The divided SNC has been holding meetings in Istanbul since May 23 to work out its stance on the Geneva 2 conference.

“Frankly speaking, we no longer pay much attention to such elections,” said Imad, an activist in Daraa, in southern Syria, who gave only a first name because he was concerned for his safety. “This coalition is like a horse cart — wherever you take it, it goes. Tell me one thing they gave to the people so far. They keep fighting over positions.”

On the first day of the talks, Ziad, an activist from Damascus and work for Syrian coalition, said he would not recognize the conference without indication that Syria’s President Bashar al-Assad is stepping down.  The Syrian coalition had failed to allocate funds properly, “while our families in and outside of Syria struggle to supply even basic human needs.”

On the other hand, Syria’s minority groups, Alawites, Christians, Kurds and Druze, have been reluctant to support the opposition uprising, with many among them accepting Assad’s argument that only his regime can act as guarantor of their safety. “The armed opposition is largely led by Syria’s Sunni Muslim majority, which accounts for around 70% of the country’s population.”

On the ground in northern Syria, rebels clashed with an opposition unit linked to al Qaeda, activists said, in a battle that signals rising tensions between local people and more radical Islamist factions. On Thursday night, several powerful blasts were heard at a weapons depot belonging to the Syrian military, according to BBC. Arabic radio reported that the explosions took place near the port of Latakya in Syria’s north.

Subsequent reports offered few new details and drew limited attention. Among them was a statement by the London-based Syrian Observatory for Human Rights, which said that, “huge explosions shook the area where a large Syrian army base and weapons depots are located.”

The latest news coming from Syria shows the fighting continues for control of the rebel stronghold of Homs, and there is still no sign of the blood bath ending in Syria.