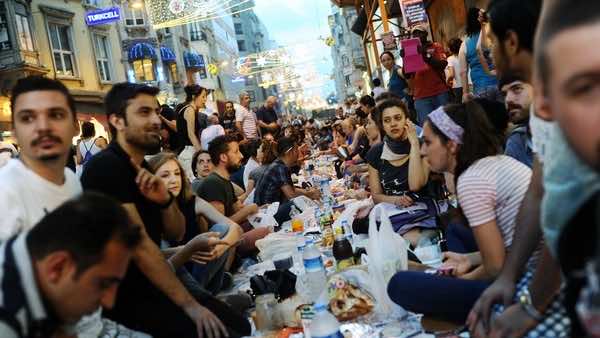 Turkish police allowed thousands of protesters who have been trying to block there development of a park in Istanbul to break their Ramadan fast on Tuesday before resuming efforts to get them to leave the area.

The previous night police fired teargas and water cannon at protesters as they tried to prevent them gathering in Gezi Park, which has become the focal point of protests against Prime Minister Tayyip Erdogan’s government.

Two leftist Muslim groups sympathetic to the protests, the Revolutionary Muslims and Anti-Capitalist Muslims, hosted fast-breaking iftar dinner in a nearby pedestrian street by the Gezi Park on the first day of the Muslim holy month of Ramadan.

The local municipality also hosted a dinner in Taksim Square by the Gezi Park and people marched in the park afterwards.

Police used loudspeakers to warn people to leave, while people booed and clapped, but the police did not intervene.

The park had been sealed off for three weeks after police expelled the residents of a protest camp there.

“I hope the state will understand what these people have been trying to say with the protests. It is a constitution alright to enter a public space and protest,” Ozge Dogu, a23-year-old university student, said.

After a police crackdown on a small demonstration on May 31against plans to redevelop Gezi Park, the protests grew into broader action against what critics see as Erdogan’s increasingly authoritarian style of government.

Gezi Park reopened to visitors on Monday afternoon but hours later police forced people out due to concerns about a planned protest rally. Clashes erupted in nearby streets before police allowed people back into the park around midnight.

One 17-year-old suffered a brain haemorrhage after being hit by a gas canister and was being treated at a nearby hospital, a medical association official said.

The Gezi protests have been unprecedented in Erdogan’s rule, which began in 2002 with the election of his AK Party. He has pushed reforms in the economy and curtailed the power of a military that had toppled four governments in four decades.

A Turkish court has cancelled the Taksim Square redevelopment project but the authorities can appeal against the ruling.