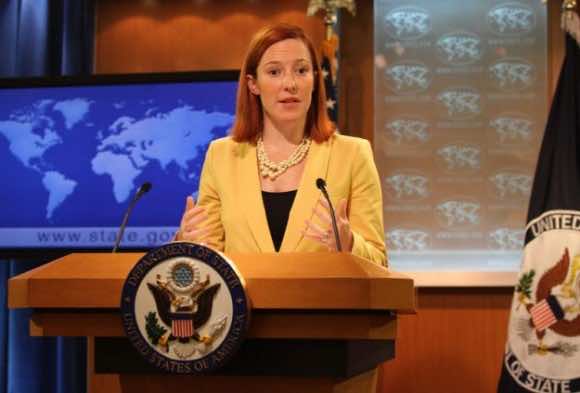 The United States Thursday urged Egypt’s interim leaders and the army to stop arbitrary arrests of Muslim Brotherhood members, saying such moves would only prolong the country’s political crisis.

These “are not in line with the national reconciliation that the interim government and military say they are pursuing,” she told reporters.

“If politicized arrests and detentions continue, it is hard to see how Egypt will move beyond this crisis.”

On Wednesday Egypt’s public prosecutor ordered the arrest of Muslim Brotherhood supreme guide Mohammed Badie and other top leaders for allegedly inciting violence after 51 people were killed in clashes on Monday.

Among those wanted by the prosecution are leading Brotherhood members Mohammed al-Beltagui, Mahmud Ezzat and Safwat Hegazi, the sources said. The Egyptian public prosecutor has also pressed charges against 200 of the 650 people it detained during the violence, with the others released on bail.

Ousted president Mohamed Morsi has also not been seen in public for more than a week since he was toppled by the military on July 3.”We have called for an inclusive process moving forward, including all parties. That’s where our focus is now,” Psaki added.