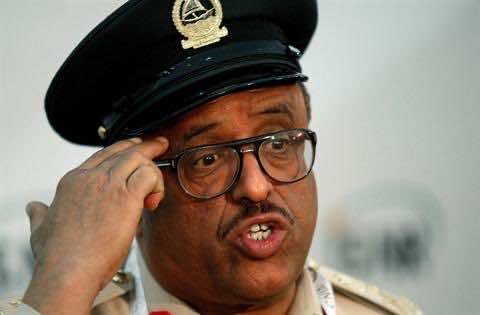 In a unprecedented statement to Dubai TV, Dubai Police Chief Dahi Khalfan said that “Israel does not pose any threat to the Arabs and that the real threat comes from the Muslim Brotherhood who will be crushed in the Arab world in five years as a maximum. “

Iran, in turn, was also demonized and seen as a major threat to the Arabs. Dahi Khalfan, who put the anchorwoman in a daze because of his weird statement, noted that the Gulf land will be the cemetery of the Muslim Brotherhood, describing them as chicks, and enemies of the Gulf States.

This unprecedented statement by an Arab security official stirred angry reactions on social networks. “How does Sherlock Holmes of Arabia dare to claim that Israel does not put a threat to the Arabs while, since 1948, it colonizes their land and usurps their first kiblah and one of the most sacred places in Islam?” a follower commented in a tweet.

“It’s absurd to say that Israel does not put a threat to the Arabs while its nuclear arsenal is enough to wipe them out all from the region,” another user said on Facebook.

“This old man is either amnesiac or an infiltrator and traitor. How did he so easily forget the Israeli massacres against the Arabs in Sabra, Shatila, Gaza, Khan Yunis, Jenin, Qana etc.?” another Facebook user asked.

Khalfan’s statement, in fact, goes in complete congruence and accordance with the Israeli position that sees that Muslim Brotherhood and Iran as the gravest threat to the security of Israel and the Middle East as a whole. Without his keffiyeh and khaliji clothes, I would have mistaken him for an Israeli diplomat or spokesperson.

Ironically, the renowned American academician Noam Chomsky, who is a Jew, sees Israel as the major threat not only to Arab security but also to the global security. He continuously criticizes the US allegations against Iran’s peaceful nuclear program. Unlike Khalfan who talks about wi’am (amity) with Israel, Chomsky repeatedly denounces the hegemonic underground expansionist and exploitative plans against the Arabs.

It’s worth noting that it’s not the first time that Dahi Khalfan releases such harsh statements against the Muslim Brotherhood. In June 2012, his tweets on Twitter caused a diplomatic crisis between the United Arab Emirates and Egypt when he wrote that “the Muslim Brotherhood are not Muslims” and that they are “a criminal group.”

Following these statements, the Egyptian Foreign Ministry summoned the Ambassador of the UAE in Cairo to seek clarifications on the statements that do not match the nature of the relations between the two countries.