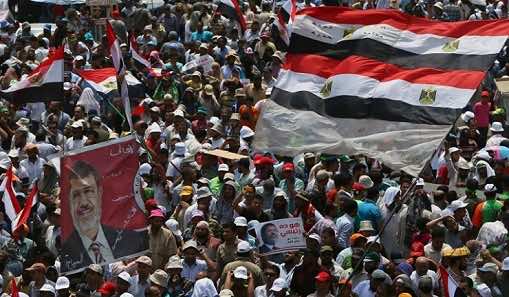 The rallies come as Germany called for the release of Morsi, who is being held in a “safe place, for his safety” and has not yet been charged, according to the foreign ministry.

“We call for an end to the restrictions on Mr Morsi’s whereabouts,” a German foreign ministry spokesman told reporters.

With an Egyptian flag in one hand and a Koran in the other, protesters gathered outside the Rabaa al-Adawiya mosque in Cairo’s Nasr City neighbourhood chanted against the military and pledged allegiance to Morsi.

Supporters of Islamists and of ousted by the army of Egypt from power Mohammed Morsi are flocking these minutes to the center of Cairo. Several marches of Muslim Brotherhood activists and other Islamic sects gather after Friday prayers at the mosque Rabia al-Adao.

Activists for and against ousted Egyptian president Mohamed Morsi have called rival rallies for the first Friday of Ramadan, as tensions soar over the army’s overthrow of the Islamist leader.

The Muslim Brotherhood, the influential group from which Morsi emerged, has vowed to keep protesting until he is reinstated, and has called separate rallies across Cairo.

But the group’s ability to mobilise remains in question with much of its leadership detained, on the run or keeping a low profile.

The anti-Morsi camp has also called for huge rallies after weekly Friday prayers, in Tahrir Square and at the Itihadiya presidential palace, with a mass iftar – the breaking of the Muslim fast – planned at sundown in the central plaza.