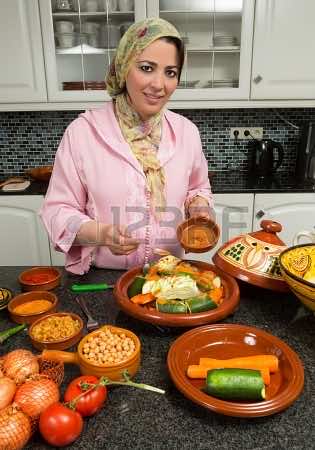 It’s eight sharp in the morning, and she’s already woken up. An avalanche of unclean dishes from last night’s nocturnal meal is awaiting her in the kitchen sink. Will she manage to finish washing the dishes in time to move on to taking care of the rest of the house? Oh, and she has a couple kids to watch after while simultaneously performing her home tasks.

She’s already exhausted while she still haven’t reached the cooking part. The fasting makes it even more challenging for her. It’s 19:00. All is clean, neat, and ready by the time the other members of the family abruptly show up to break their fast around the evening table. She eventually made it, isn’t that a miracle?
Ramadan is a month of spiritual devotion. Apart from this religious distinctiveness that characterizes the holy month, people still perform their day-to-day activities, but with more dedication, faith and contentment.

Moroccan woman, representative of all Muslim women in this article, remains a special case. In Ramadan, she’s handed an additional pile of tasks to perform with a stressing deadline hastening her work. She has to play her role as a mother, as an aspiring student or employee and as a homemaker.

In Ramadan, her pile of responsibilities is made heavier, if not almost impossible. Since Morocco is still predominantly a patriarchal society, a Moroccan woman, whether she has a job or not, is expected to play a number of roles that have been socially assigned to her. Preparing the composite and rich evening meal of Ramadan is only one. Yet, it’s not as feasible as it sounds. Those who have seen pictures of a Moroccan evening meal in Ramadan, would have already constructed a picture on the amount of dedication invested to reach such outcome.

What makes her task list even more challenging in Ramadan is when her various social roles overlap. She has to be the stay-at-home mom, the employee, the cook and the wife simultaneously. Some of these roles have been socially attached to her, such as taking care of the house, thus being the sole human engine in the family giving 100%.

In Ramadan Moroccan women delightfully and voluntarily enroll in a military drilling. While men feel solely bound to go to their work, women’s checklist is way longer than men’s. Astoundingly enough, Moroccan women manage to check all items in their list without spotting any negligence at almost all levels.

In Ramadan, new responsibilities arise for women. In a traditional Moroccan family, women are literally multifunctional nurses. They wake up evidently earlier to get enough time to finish their home tasks before Maghrib call to prayer. The post-ftour period (after breaking one’s fast) is a new list of tasks.

There is dinner to prepare, a customary meal that morphs into a feast in Ramadan, thus necessitating more work from women. Amazingly enough, they ultimately manage to complete all tasks without any echo of complaint.

It is saddening to realize that the tasks attached to women as “duties” are not all so. Apart from their irreplaceable role as mothers, the other roles women play can practically be performed by men too. In societies where patriarchy still prevails, there is this tendency to associate men with income and women with management and care.

Outside the patriarchal context, these roles become interchangeable. Men do what women are believed to do typically, and vice versa. In this sense, the concept of the family is no longer based on systematic distribution of roles in conformity with society’s conceptualization of gender roles. Rather, the family becomes a network of collaborative relationships for the better of the whole.