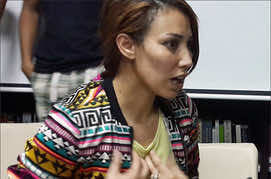 Moroccan hip-hop star Soultana first dreamed of becoming a rapper when she was 13.

The popular musical genre has allowed her to realise everything she ever wanted to do, she said.

But before launching her rap music career, Soultana had to overcome objections from a strict father. He had wanted her to concentrate first on her studies. She finished her studies and later pursued rap stardom after quitting a job as a stewardess.

Now, through her music the recording artist channels her generation’s collective needs, aspirations, and yearning for liberty.

“Rap has become the voice of people,” Soultana told Magharebia. “We’ve noticed that in the Arab Spring in some Arab societies, as young people [have] found in this genre of art some sort of courage and freedom to express their desire to change. Therefore, they sang for freedom and social justice, each in his/her own way. However, the message and goal [are] the same.”

Magharebia caught up with Soultana during her July 3rd appearance at Dar America, the American Cultural Centre in Casablanca. She went there to talk to an audience of young Moroccans and students about the hard work she put into her career as a rapper.

She also told them about her recent trip to the United States. There she met with American university students, who were eager to learn about her career and the difficulties she had faced as a woman trying to break into the male-dominated hip-hop scene.

For Soultana, her art conveys a noble message. She said it helped raise awareness among youths in Morocco and other countries about issues that mattered to them, such as jobs, gender equality and being treated with respect by older people.

The artist recently took part in festivals in the kingdom and overseas. Late last month, Soultana played in the sixth annual Assalamalekoum Festival in Nouakchott, Mauritania.

On World Music Day, she performed her hit song “Sawt Nsa” (“the voice of women”).

“It’s a true story of a woman who faced tough times because of a man’s injustice and his heinous exploitation of her,” Soultana said.

“That woman was also rejected by society, even though she was the victim. Therefore, the song is a cry in the face of the male mentality, which still oppresses women and underestimates them as creatures not worthy of dignity. My message is to tolerate as long as our religion promotes tolerance and forgiveness,” she said.

Soultana, who is fluent in English, sings in the Darija dialect so that all Moroccans can grasp her message.

As she put it, Islam doesn’t deny the right of women to live freely and with dignity.

“If Islam prohibits anything, it prohibits lying, hypocrisy, deception, [and] bad morals that offend this religion,” she said.

“When I was in America, young people would ask me about the veil and whether I came to America to escape from a society that prevents women from singing and binding them to wear the veil. I would [tell them] that refined art is not prohibited for women in my society because a woman’s veil is not her appearance but her mind, which rejects vice and debauchery…,” Soultana added.

“I believe that Islam prohibits abusing others and doesn’t prohibit singing that inspires hope and happiness,” she said.