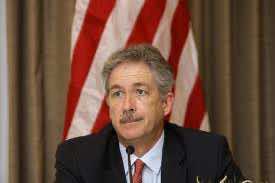 A top US official was heading to Cairo on Sunday for talks with interim government leaders, the first high-ranking administration member to visit Egypt since the ouster of Mohamed Morsi.

Under Secretary of State Bill Burns will visit Egypt from Sunday to Tuesday, the State Department said, adding that he would “underscore US support for the Egyptian people.”

The news came as caretaker premier Hazem al-Beblawi resumed talks on forming his cabinet, 11 days after Morsi was ousted in a July 3 military coup amid massive protests against his year-long rule.

Prominent liberal leader Mohamed ElBaradei, who assisted in the talks Beblawi began a day earlier with ministerial candidates, was Sunday sworn in as interim vice president for foreign relations, the presidency said.

In a brief statement, the State Department said Burns would “meet with interim government officials as well as civil society and business leaders.

“In all these meetings, he will underscore US support for the Egyptian people, an end to all violence, and a transition leading to an inclusive, democratically elected civilian government.”

On Friday, the US for the first time called for Morsi’s release, and again condemned a wave of arbitrary arrests of members of his Muslim Brotherhood.

But since the July 3 ouster, Washington has struggled to define whether Egypt’s first democratically elected president was the victim of a coup, which would legally force a freeze on some $1.5 billion in vital military and economic US assistance to Cairo.