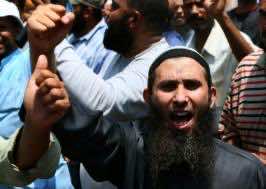 Egypt’s public prosecutor on Sunday ordered the freezing of assets belonging to 14 top Islamists, as the US dispatched its first senior official to Cairo since president Mohamed Morsi’s ouster.

Under Secretary of State Bill Burns will visit Egypt from Sunday to Tuesday, the US State Department said, adding he would “underscore US support for the Egyptian people”.

His trip comes amid growing pressure on Morsi’s Muslim Brotherhood, which is in disarray with key figures either detained, on the run or keeping a low profile.

It also comes amid international calls for the release of Morsi, Egypt’s first freely elected president who was toppled in a popularly backed military coup on July 3.

The Brotherhood has refused to join the new government headed by caretaker prime minister Hazem al-Beblawi who is pushing ahead with talks on forming his cabinet.

The ultra-conservative Islamist party Al-Nur confirmed it would not take part in the interim government either, with spokesman Nader Bakkar telling AFP: “We would participate only in an elected government.”

Beblawi has said his cabinet’s priorities would be to restore security, ensure the flow of goods and services and prepare for parliamentary and presidential elections.

It relates to four deadly incidents since Morsi’s overthrow, including clashes in Cairo last Monday in which dozens died.

The order comes a day after prosecutors received criminal complaints against Morsi, Badie and other senior Islamists, with a view to launching a formal investigation.

The complaints include spying, incitement to violence and damaging the economy.

Morsi has not been seen in public since his ouster.  In his first public comments since deposing the Islamist leader, military chief General Abdel Fattah al-Sisi defended the move, saying the army took thedecision after Morsi rejecting holding a referendum on his presidency.

“The armed forces, with all its personnel and its leaders, decided without reserve to be at the service of its people and to empower their free will,” he said in a statement.

The interim leaders say Morsi is being held in a “safe place, for his own safety,” despite calls for his release by Germany and the United States, which has condemned a wave of arbitrary arrests of Brotherhood members.

The prosecutor said on Sunday that 206 out of a total of 652 people arrested over fatal clashes this week had been released on bail.

Morsi’s ouster has plunged Egypt into violence.  Fighting erupted Sunday between gunmen and the army near Israel, in the Sinai peninsula, which has witnessed a number of deadly attacks in the past week, security sources said.

The worst violence since the military coup took place outside the elite Republican Guard’s Cairo headquarters last Monday, where 53 people, mostly Morsi supporters, were killed in what the Brotherhood described as a “massacre” by the security forces.

On his visit to Cairo, Burns would push for “an end to all violence and a transition leading to an inclusive, democratically elected civilian government” at meetings with various parties, the State Department said.

Washington has struggled to define whether Morsi was the victim of a coup, which would legally force a freeze on some $1.5 billion in vital military and economic US assistance to Cairo.

Interim president Adly Mansour has set a timetable for elections by early next year, according to a roadmap drafted by the military, while Beblawi’s new cabinet could be unveiled by Tuesday or Wednesday.

During his single year of turbulent rule, Morsi was accused of concentrating power in Brotherhood hands, sending the economy into free fall and failing to protect minorities.

But his supporters say his ouster was an affront to democracy, and the Brotherhood are planning more mass protests on Monday, including at the Republican Guard headquarters.

Rival protests are also planned on Monday in Tahrir Square and at the Ittihadiya presidential palace by the main coalition that had called for Morsi’s resignation.