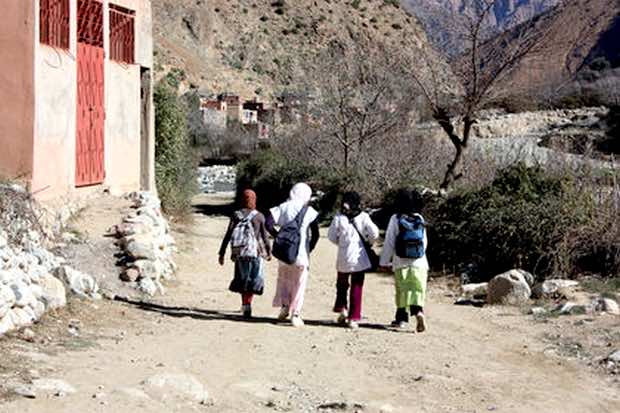 In recent years there has been a growing governmental interest in developing infrastructure in rural areas of Morocco. The figures produced by the Human Development Index (HDI) have shown that Morocco has a long way to go to create a  viable environment for growth in remote villages in the Atlas and Riff mountains. The policies followed since Independence in 1956 have proven their limitation. Vast parts of rural Morocco lacked electricity and water installations. Years of severe drought drove thousands of peasants to migrate to towns in the 1980s. In cities like Casablanca, Rabat, and Fes, slums were visible signs of the rising poverty among Moroccan population.

In 1998 when the opposition party took office, a new initiative was taken. A large program of electrification of Moroccan rural areas took place in a relatively short period of time. 34.000 villages benefited from this project by the end of the program in 2007.[1] Along with electrification, the government sought to supply drinking water to remote villages. An ambitious program, PAGER (Programme d’approvisionnement groupé en eau potable des populations rurales) was launched by the government and resulted in significant amelioration of living conditions.[2]

Nevertheless, the overall HD indicators still showed that Morocco was lagging behind, and that the successes achieved were not enough. The Human Development Index introduced by the United Nations in early 1990s focused on three major indicators, namely life expectancy, living conditions and education.  The last Human development report based on statistics for the year 2011 shows that Morocco does not feature among the first ten countries with highest HD scores in Africa.

In terms of life expectancy, the figures supplied by CIA World Factbook show that the total population average age is 76.11 years according to the 2011 estimates. Morocco ranks 79 out of 221 countries. This signals a significant improvement from 2004 figures which gave the average age at 70.66.[3] Infant mortality rate dropped from total of 41.62 deaths per 1,000 live births in 2004 to 26.49. Still the rate is high and the government is required to develop new projects to reduce infant mortality in rural areas where health centers are scarce and poorly supplied.

Another criterion used to measure Human development progress is the standard of living based on Gross Domestic Product (GDP) figures. Morocco imports oil and gas which creates enormous pressure on the national budget. The GDP of Morocco for 2009 is estimated at $163 billion a significant growth from $131.5 billion recorded for 2007.[4]

In face of the increasing demand for job opportunities, decent housing and good services, the economic challenge for Morocco remains great. improvement in social welfare is dependent on sustained economic growth and modernization and empowerment of the industrial sector.

While recent statistics have shown that Morocco achieved significant economic progress and continued to reduce the high rates of poverty especially in rural areas, educational policies have lacked the same vigor and efficiency. The figures cited in The 2004 Census show that 47.7% of the population aged over 15  are illiterate. Only 39.6% of the female population is literate compared to 65.7% males. These figures are old and do not pay homage to the efforts deployed by the recent governments. Still, there are three major causes for this high rate of illiteracy. First there is the lack or difficulty of access to public schools for children living in rural areas. Until recently, rural population especially in remote villages did not have access to schools which were either nonexistent or too far situated from students’ homes. In particular cases, even with the establishment of primary schools, parents saw little use in sending their kids to school as they needed their help in rearing the cattle and tending the land. Girls particularly were prevented from attending school because education was perceived unnecessary as they would grow to be housewives.

The second factor for the high rate of illiteracy is the number of school dropouts especially in rural parts of Morocco. Given the remoteness of schools and the lack of support from families, students gradually fail to cope with the demands of their instructors and return to their old farming occupations. Even with the introduction of new policies, the number of drop-outs in elementary schools remains worrying. The figures supplied by the ministry of education for 2008 show that 216,176 students left school, more than half of them were girls. The figures related to middle schools are no different. The number of dropouts counted 167,929, of whom 67,391 were females.

Aware of these continuing difficulties and determined to provide adequate solutions, the Moroccan government launches an emergency plan for 2009-2012 which aims at prolonging obligatory education to 15 years.  The cost of this ambitious plan is 100 millions de Dirhams. The plan includes building boarding schools in the villages, rebuilding decaying ones, giving incentives to teachers teaching in far-flung villages. The government also initiated a policy of helping poor families by offering them cash money on condition of enabling their children to remain at school. Also in the last two years the government launched the “one million schoolbags” to support poor families who faced difficulties in providing for their children.[5]

The most enduring problem in improving HD figures, however, remains adult illiteracy. The high rate of illiteracy is due mainly to the existence of a large number of adults who at a point in their lives failed to learn how to write and read. The government established a department within the ministry of education devoted to exclusively to fighting illiteracy and providing non-formal programs of education for adults and drop-outs. The efforts made during the first years of launching this initiative produced encouraging results. The 2006 census shows a decline in the rate of illiteracy from 52.3% in 2004 to 34% among the population aged 10 years or more. For this extraordinary achievement Morocco was awarded the UNESCO Confucius Prize for Literacy in 2006.

These results are the fruit of joint efforts between the government and a large number of non-governmental organizations. Significant as they are, the achievements realized so far are not satisfactory in the long term. Fighting illiteracy is certainly not the job of the government alone. There are a number of active associations devoted exclusively to fighting illiteracy among adult populations in urban as well as rural areas.

Given the high rate of illiteracy and limited resources available to these associations, adult illiteracy will not be eradicated in the next few years as it was hoped. The policy followed by the government has not made it clear to the public that illiteracy has a serious and immediate impact on global economic development of the country. The mobilization of the civil society to take an active part in fighting illiteracy will certainly yield more fruitful results. School teachers and students have not been directly involved in this operation. In a number of countries particularly in Latin America students were trained to teach adults the basics of reading and writing. In Ecuador, for instance, a campaign was launched in 1988 under the name “Monseñor Leonidas Proaño” that required secondary-school students to provide education for illiterate adults and be useful to their communities. The program cost US$ 3 million and was fully funded by the Ecuadorian government. 75. 000 secondary-school students took part in this campaign. They were first trained to be good functional educators and social workers. Not only did students help adult illiterates to learn how to write and read, they also helped create convenient conditions for adult learners, especially mothers by taking care of their kids at home. For their services, students received “a formal recognition for their contribution to the campaign and to the country.”[6]

The results of this campaign were excellent as Rosa María Torres, the ex-pedagogical director of the campaign states in her report. One of her concluding points was that “young students can make excellent literacy educators and community organizers if provided with adequate training and support, empowered and reinforced in their self-confidence and self-esteem”.[7]

The present coalition government led by Justice and Development (PJD) of moderate Islamist leanings has the responsibility to devise a new and more ambitious policy to replace the Emergency Plan launched by the previous government and which has generated significant results. It is fair to cite the report of the Oxford Business Group in this respect:

The prospects, however, are far from cheerful . Along with rendering education accessible, the PJD led government is now under increasing pressures to provide decent employment opportunities. The concluding note of the Oxford Business Group draws attention to this challenge:

Instability across the region caused by the Arab Spring has put more pressure on the government to step up its efforts in tackling youth unemployment through better quality education, easing the transition for graduates from campus to the workplace.[9]

[5] More Moroccan students to benefit from “One Million Schoolbags” initiative

Dr. Karim Bejjit is an associate professor of English at Ben M’sik Faculty of Letters, Hassan II-Mohammedia University, Casablanca. Some of his research interests are Anglo-American travel writings on Morocco, North African cultural history and Moroccan literature in French and Arabic. Some of his publications are  Hamed Al-Maghribi and Other Tales (2013) and “The Dutch in Barbary during De Ruyter’s Time,” De Ruyter: Dutch Admiral (2011). Some of his scholarly articles and writings are accessible through his blog: http://writingthemaghreb.wordpress.com.