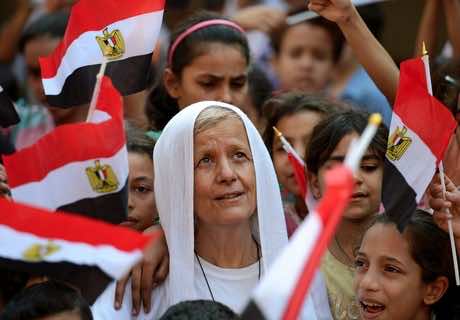 Egypt’s Coptic Christians are holding out hope the removal of an Islamist president will help curtail sectarian discrimination against them, despite being targeted in deadly attacks since Mohamed Morsi’s ouster.

At least six Copts have been killed in a wave of nationwide violence following the popularly backed military coup on July 3, said the Egyptian Initiative for Personal Rights (EIPR).

One of them was found decapitated in the Sinai peninsula.

Copts make up six to 10 percent of Egypt’s population, and they say they were the target of growing discrimination during Morsi’s time in office.

A constitution adopted by Morsi’s Islamist-dominated government in December 2012 particularly angered the community, and UN rights chief Navi Pillay criticised the document for curtailing certain rights, including those of non-Muslims.

Now the Copts face other battles.

Many of them took to the streets on June 30 in the mass protests that led to Morsi’s ouster by the military, and they have been accused by firebrand Islamist preachers of conspiring with the army.

Emad Gad, vice president of the Social Democratic Party, said the demise of Morsi’s Muslim Brotherhood gave them a better chance to secure their rights,even though extremist attacks might rise.

“The Copts now are ready to pay the price in order to build our democratic country,” Gad told AFP.

“We are asking for citizenship, equality and human rights… we are ready to play a role in building our new regime.

“I expect now that we will see some sort of attacks from jihadists, from Salafists and militants on Copts. We expected that,” he added.

The EIPR said it was troubled by the “disregard” of state institutions towards the latest sectarian attacks, and has called for swift action by the authorities to prevent the targeting of citizens “on the basis of religion”.

The organisation’s Ishak Ibrahim condemned “the inflammatory rhetoric” against Copts “from some Islamist leaders and supporters of the former president”.

But other members of the community agree the fallout from supporting Morsi’s overthrow is justified.

“This is the price we pay for our freedom,” said Beshoy Tamry, a founding member of Coptic rights group the Maspero Youth Union.

Numerous incidents in the past two years have heightened the sense of persecution, including charges brought against several Copts under a long-standing but previously little-used “religious defamation” law during Morsi’s rule.

In May, a primary school teacher was due to stand trial for allegedly insulting the Prophet Mohammed, human rights watchdog Amnesty International said.

After Morsi’s ouster, the military suspended the constitution, a move that Coptic activists hope will lead to a fairer text and an end to prosecutions for religious defamation.

“The Copts are encouraged, they will support the government and play a positive role in the state,” said Nabil Samuel Abadir, the former head of a Cairo-based Coptic NGO.

“The constitution has been suspended and is being reviewed now, so all the laws that came out of it have to be reviewed again under a new constitution.”

The church has given its backing to army chief General Abdel Fattah al-Sisi’s roadmap for a new government and fresh elections next year.

But many Copts have bad memories of the last period of military rule, which ran from the time of Hosni Mubarak’s ouster in February 2011 until Morsi’selection in July 2012.

In the worst violence suffered by the community in years, thousands of demonstrators marched to the state television building in Cairo’s Maspero neighbourhood in October 2011 to denounce the torching of a church in the southern province of Aswan.

The army and riot police charged at the protesters, leaving 26 Coptic Christians, one Muslim man and one policeman dead.

Sameh Fawzy, a Coptic former member of parliament, said he was glad the military had intervened to remove Morsi, despite the violence at Maspero.

“We have to acknowledge that even if some things happened with the army, it was a part of an uncontrollable situation at that moment,” he said.

“I think what the army did with Christians over the last three years makes it clear that it… does not discriminate between Muslims and Christians.”

Fawzy pointed to the fact military chiefs attended Coptic church services during Easter, while Morsi only sent a representative.

Others are not convinced.

The EIPR on Monday criticised the “failure of the security apparatus to act — which at times looks like collusion — to protect citizens and their property who are being targeted on the basis of their religion.”

Mina Thabet, of the Maspero Youth Union which was founded after the 2011 violence, said the community’s previous experience of military rule was “very bad”.

“But I think the way we get out of this is to build a civilian democratic new country.”