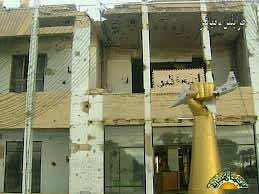 Slain Libyan dictator Moamer Kadhafi’s sprawling residence in Tripoli, Bab al-Aziziya, will be turned into an amusement park under plans announced on Tuesday by the tourism minister.

“The work to clear away the rubble from the ruins of Bab al-Aziziya, which was a black spot in Tripoli and a source of concern for residents, has begun,” the minister Ikram Basha Imam said.

“This space will be transformed into a green area and an amusement park as a place of entertainment for Libyan families,” she said.

It was heavily fortified during Kadhafi’s 42 years of iron-fisted rule, but was destroyed by NATO air raids and a rebel assault that reached the Libyan capital on August 20, 2011.

The site was plundered and occupied by squatters.

In August 2012, Prime Minister Abdelrahim al-Kib announced plans to construct a library, theatre and a monument to martyrs of the conflict on the site.

But that project was subsequently abandoned in favour of a public park.

The tourism minister said eight private companies had been contracted to build the new park.

She added that the department of social services was identifying and rehousing homeless families who have been occupying the premises since the conflict.

In October 2011 Kadhafi was captured and killed while trying to flee Sirte, his hometown and the last major city to fall to NATO-backed rebels who rose up against his regime nine months earlier.