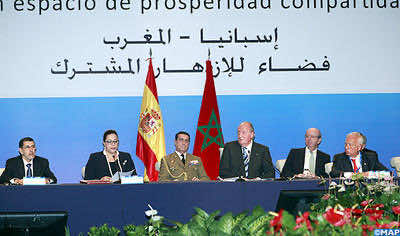 The Morocco-Spain economic forum, held under the theme “Morocco-Spain: a shared area of prosperity”, opened on Tuesday in Rabat.

The forum is marked by the effective participation of HM King Juan Carlos I of Spain, who is on an official working visit in the Kingdom at the invitation of HM King Mohammed VI on July 15-18.

The meeting, organized at the initiative of Morocco’s employers body (CGEM), brings together several ministers from both countries and 130 employers and leaders of major Moroccan and Spanish public and private enterprises, as well as many SMEs.

The event, aimed at strengthening the economic partnership between the two countries, will touch mainly on shared growth through SMEs, technological partnership, connectivity, infrastructure and collocation.

These officials will meets on means to boost bilateral cooperation.