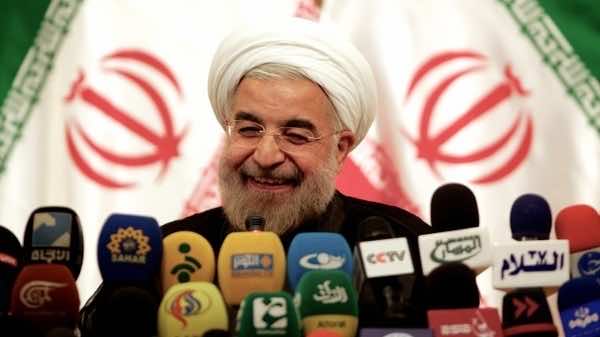 Iran’s president-elect Hassan Rowhani has brushed off threats of military action against the Islamic republic by Israeli Prime Minister Benjamin Netanyahu, saying such warnings only made him “laugh”, media reported Wednesday.

“When some (the United States and Israel) say that all options are on the table and when a miserable regional country (Israel) says such things, it makes you laugh,” Rowhani said in an address to Iran-Iraq war veterans, according to Iranian media reports.

“Who are the Zionists to threaten us?” the moderate cleric said, insisting that warnings of an Iranian retaliation had stopped Israel from carrying out its threats to launch strikes on Iran.

Netanyahu on Sunday renewed his threat to take unilateral military action to halt Iran’s nuclear programme, disparagingly referring to Rowhani as “a wolf in sheep’s clothing” who would “smile and build a bomb”.

“We’re closer than the United States. We’re more vulnerable. And therefore, we’ll have to address this question of how to stop Iran, perhaps before the United States does,” Netanyahu said on CBS News’s “Face the Nation.”

“They’re edging up to the red line. They haven’t crossed it yet,” the Israeli premier said, referring to the point at which Iran would be able to make its first nuclear weapon.

“They’re getting closer and closer to the bomb. And they have to be told in no uncertain terms that that will not be allowed to happen.”

Israel is the Middle East’s sole but undeclared nuclear power.

Iran for years has been at loggerheads with world powers over its nuclear drive, which Western nations and Israel believe is aimed at developing an atomic weapons capability. Tehran insists its nuclear program is entirely peaceful.

Rowhani will succeed Mahmoud Ahmadinejad as Iran’s president on August 3.