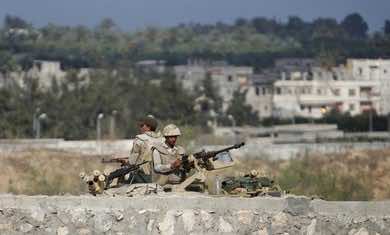 Gunmen attacked an Egyptian army checkpoint in the Sinai border town of Rafah wounding eight people, security sources said Wednesday, as troops massed for an offensive against Islamist militants in the restive region.

The attackers fired rocket-propelled grenades at the checkpoint in a residential area of Rafah late on Tuesday, before fleeing in their all-terrain vehicle, the sources said.

Six soldiers were wounded in the attack as were two civilians, including a 31-year-old man who was hit in the head by a bullet as he fled the scene.

Since the ouster by the army of president Mohamed Morsi on July 3, militant groups have launched almost daily attacks on troops and police in the increasingly lawless peninsula, killing several members of the security forces and two Egyptian Christians.

At dawn on Monday, three workers from a cement factory were killed in an attack on the bus in which they were travelling in El-Arish, north Sinai’s main town.

The first batch of Egyptian military reinforcements arrived in Sinai on Tuesday, a security official said, hours after Israel gave Egypt the go-ahead to deploy two battalions to the region to “fight terrorism”.

The reinforcements reached El-Arish, where troops are preparing an offensive against militant groups, the official said.

“Around 20 armoured vehicles and personnel carriers crossed the Suez Canal accompanied by bulldozers and drilling equipment,” the official told AFP.

More support was on its way, he added.

Israeli Defence Minister Moshe Yaalon confirmed he had given Egypt the go-ahead to send two battalions to tackle the militants in Sinai on Tuesday.

“When these forces are involved in the fight against terrorism, as long as we’re consulted and it does not violate the treaty between the two countries, we accept their requests so they can remove the terror threat from Sinai,” Yaalon told army radio. 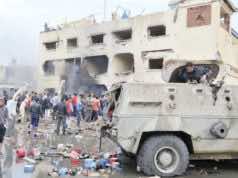