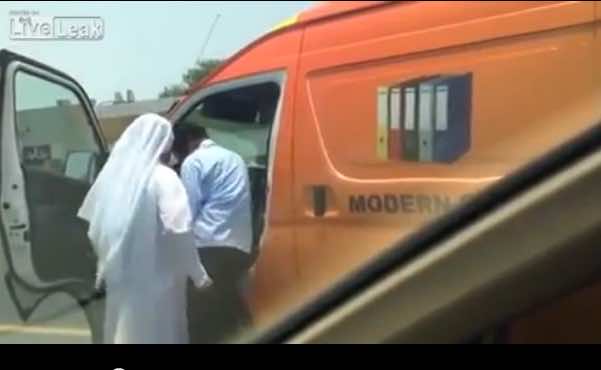 A video showing an Emirati official beating a driver from Asian background with his “agal “and punching him because of a minor traffic accident, went viral on the social media and through mobile software like What’s app.

Gen Al Mazeina said the actions shown in the video were not representative of the UAE’s culture and tradition, and that despite the alleged attacker being a government official, “no one is above the law”.

Many Emirati condemned the official violent behavior shown in the video on social media. One of them said talking about the official : “He has also brought shame to us all. People will see this video and use it to stereotype Arabs and Emiratis as heartless, racist snobs.”

A case has been filed against the Emirati official and further investigations will be conducted today by public prosecutors.

On the other hand many Emirati internet users hailed the police’s firm handling of the matter. “This shows that we do not tolerate such shameful behavior,” said Mariam Nasser. “I just hope that news of his arrest spreads as wide and as fast as the video did.”

The UAE penal code stipulates that any assault that does not result in serious injury is punishable by a maximum sentence of one year in prison and a fine of up to Dh10, 000.

The family of the arrested official has reportedly filed a case against the man who filmed the incident and uploaded it into YouTube.

The legislation about video sharing in the UAE is rather strict. Under the UAE’s cybercrime laws, recording videos in public without the permission of those being filmed is illegal and constitutes defamation.