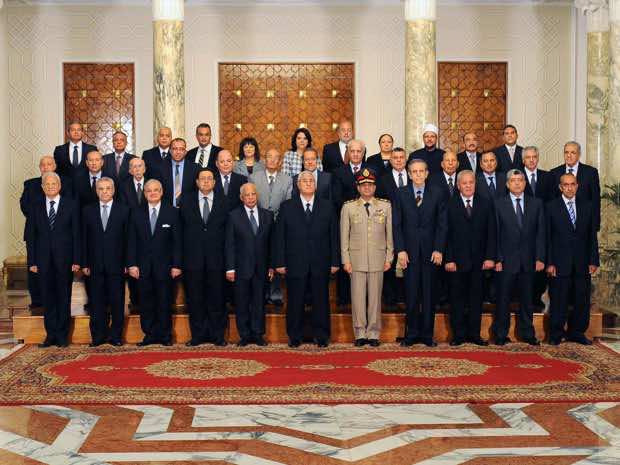 Egypt’s first interim government since the military toppled president Mohamed Morsi two weeks ago was sworn in Tuesday, after deadly clashes between the security forces and the deposed Islamist’s supporters.

The Muslim Brotherhood, the influential movement from which Morsi hails, immediately rejected the 35-member cabinet.

“We don’t recognise its legitimacy or its authority,” spokesman Gehad El-Haddad told AFP.

None of the newly appointed ministers is affiliated to any Islamist party or movement, as the Brotherhood and the ultra-conservative Al-Nur party both spurned calls for them to participate.

The swearing-in ceremony took place after overnight clashes in the heart of Cairo and in adjacent Giza, in which officials said seven people were killed and 261 wounded. Hundreds of protesters were also arrested.

Earlier, US envoy Bill Burns — the most senior American official to visit since the July 3 coup — had appealed for an end to the violence rocking the Arab world’s most populous nation.

Within hours however, the Egyptian capital was rocked by political violence for the first time since dozens of Morsi supporters were shot dead outside an elite army barracks early last week.

Two people died in clashes around the central Ramses area near Tahrir Square, while another five were killed in Giza, emergency services told AFP.

A security source cited by state media said 401 protesters were arrested in the Ramses area alone, and at least 17 security personnel were injured.

Thousands of Islamists had poured onto the streets Monday evening after the iftar meal, with which Muslims break their daytime fast during the holy month of Ramadan, to demand the reinstatement of Morsi.

Their leader has been in custody since his overthrow.

Some of them blocked the October 6 bridge over the Nile in central Cairo, hurling rocks at the security forces, who responded with volleys of tear gas. Clashes continued in Cairo into the small hours of Tuesday.

The United States condemned the violence. State Department spokesman Patrick Ventrell said it made the transition “much more difficult,” but he insisted Washington was not taking sides.

Washington has refrained from saying Morsi was the victim of a coup, which would legally require a freeze on some $1.5 billion in US military and economic assistance to Cairo.

The office of EU foreign policy chief Catherine Ashton said she would travel to Cairo on Wednesday to urge its leaders to ensure a swift return to democracy.

“I am going to Egypt to reinforce our message that there must be a fully inclusive political process, taking in all groups which support democracy,” Ashton said.

The deaths are the latest in a wave of unrest since the coup, bringing to more than 100 the number of people killed, according to an AFP tally.

Analyst Samer Shehata said Egypt’s budget deficit, reforming the interior ministry, establishing the rule of law and restoring security in the Sinai peninsula were among the pressing issues for the new government.

“How to deal with the protesters on the street at the moment is another very serious issue,” he added.

Ten weeks after cutting Cairo’s sovereign rating to junk-level CCC+, S&P said it would hold the rating there, with a “stable” outlook, despite the July 3 military coup.

The diplomatic spat came as the authorities tightened the screws on Morsi’s backers, freezing the assets of 14 top Islamists, including nine Brotherhood leaders.