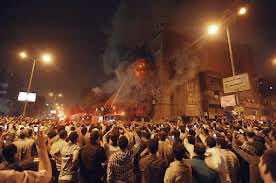 The interim government tasked with putting Egypt back on track after president Mohammed Morsi’s ouster faces enormous challenges, from fixing the shattered economy to restoring security and democracy, experts say.

The new cabinet does have several factors working in its favour, however.

A wide section of the population that was bitterly disillusioned with Morsi’s rule, including several ministers, is supported by the country’s top religious authorities, both Muslim and Christian.

But major risks remain, with the threat of more violence between members of Morsi’s Muslim Brotherhood and the security forces, and a surge in deadly attacks by militants in the Sinai, home to Egypt’s luxury Red Sea resorts.

Interim president Adly Mansour has set the government a tight timetable for reforming the constitution and holding fresh elections, while structural economic problems, including unaffordable food and fuel subsidies and a bloated public sector, must be confronted.

“There are a variety of challenges and unfortunately they can be overwhelming,” said Samer Shehata, who teaches Arab studies at Georgetown University.

Islamist parties and movements are totally absent from the new 34-member cabinet, in which a number of well-known technocrats hold senior positions.

Army chief Abdel Fattah al-Sisi’s appointment as deputy premier bolsters the military’s strong support for the government, while also raising suspicions about the cabinet’s independence from the generals who toppled Morsi.

Shehata says restoring security, which has sharply deteriorated since the fall of former strongman Hosni Mubarak in 2011, is essential.

A key task facing the government, namely how to bring back international investment and attract tourists, “has to be predicated on some kind of stability or security”, he said.

Reforming the police, known for its brutal methods and a leadership little-changed since the Mubarak era, is another pressing issue.

Sophie Pommier, an expert on the Arab world at Sciences-Po university in Paris, says the new government is under greater pressure to achieve results than its predecessor.

“Lacking the legitimacy of an elected government, it will have to earn it through concrete results,” she said.

Besides fixing the economy, the cabinet headed by liberal economist Hazem al-Beblawi “must meet high expectations in terms of the redistribution” of wealth, with Egyptians “waiting for quick signs that things are going in the right direction,” Pommier added.

But continuing violence “will complicate the situation”, she said.

The Brotherhood, weakened but not defeated after Morsi’s overthrow, has certainly not had its final word.

Brotherhood members have already demonstrated, through their ousted political wing and their ability to organize civil unrest, that they can certainly make life difficult for the new authorities.

Sameh Makram Ebeid, a former member of parliament for the liberal Egyptian bloc, argues that the success of the political transition is by no means a given.

“There is a lot to do with all the Islamists on the streets, or in the Sinai. It’s a huge task,” he said.

“The next major battle will be the parliamentary elections. It is still possible that the Islamists could have a majority, even if it is only marginal.”