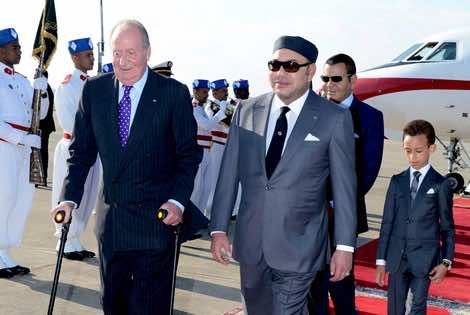 King Juan Carlos I of Spain left Morocco, on Thursday, at the end of a four-day official working visit to Morocco.

Upon his departure at the Rabat-Salé airport, the Spanish sovereign was seen off by King Mohammed VI who was accompanied by Prince Moulay Rachid.

The Spanish sovereign was also seen off by the head of the government, speakers of both houses of parliament, the ministers of Interior, of Foreign affairs, of Equipment, Transport and Industry, and of Trade and New Technologies.

In a joint statement issued on Thursday at the end of the Spanish monarch’s official visit to Morocco, King Mohammed VI and King Juan Carlos I commended the excellent bilateral relations in all areas, as well as the strengthening of exchanges at all levels between Morocco and Spain and encouraged their governments to stay on this track to further this new model of good neighborliness between the two kingdoms.