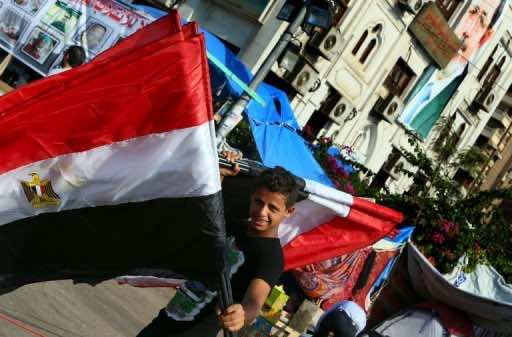 Mohamed Morsi’s Islamist backers planned rallies in Egypt on Friday for his reinstatement, as his army-appointed successor said opponents wanted to plunge the country into “the unknown” and the military vowed to confront violent protests.

The Islamists were to begin their pro-Morsi protests after weekly Friday prayers from 18 mosques across the capital, amid heightened political tensions more than two weeks after his overthrow in military coup on July 3.

The protesters were expected to converge at the Rabaa al-Adawiya mosque in northeast Cairo, where Morsi’s supporters have been camped since his ouster, and outside Cairo University, near the city centre.

“(It) will be a famous day, a very important day in the history of the Egyptian revolution,” prominent Brotherhood member Farid Ismail told AFP.

Adly Mansour, who was installed as interim leader after the popularly backed coup, pledged to rein in those who wanted to push Egypt “into the unknown.”

“We will fight the battle for security to the end. We will preserve the revolution,” he said a speech Thursday night, in comments echoed by the army.

Although mostly peaceful, the protests by Morsi loyalists have resulted in clashes that have killed dozens of people since his ouster, with the unrest claiming more than one hundred lives altogether, according to an AFP tally.

In the worst single incident, at least 53 people died, mostly Morsi supporters, during clashes with soldiers outside a Cairo army barracks where they believed the deposed president was being held.

The military on Thursday warned it would decisively confront any violence in the protests.

“The armed forces warn against any deviation from peaceful expressions of opinion, and the resort to violence,” it said in a statement on its Facebook page.

“Whoever resorts to violence in Friday’s protests will endanger his life, and will be treated with utmost decisiveness, within legal bounds,” the statement added.

Separate rallies were also planned by anti-Morsi activists in Tahrir Square and outside the presidential palace, raising the possibility of violence in the capital.

Their demonstrations have been far smaller since the mass rallies clamouring for Morsi’s resignation in the days leading to the coup.

In his speech, Mansour offered an olive branch to Morsi’s Muslim Brotherhood, saying: “The framework of justice and reconciliation extends to all.”

The movement has categorically refused to recognise Mansour’s caretaker government, which was sworn in earlier this week but with Islamist parties and movements totally absent.

Instead the Brotherhood are placing their hopes in sustained protests they believe may reverse the coup that toppled Morsi after nationwide demonstrations against him.

Thousands of them have been camped out around the Rabaa al-Adawiya mosque in Cairo’s Nasr City, where they have vowed to remain until their goal is achieved, despite the growing anger of residents in the neighbourhood.

“We have no problem with continuing for a month, or more than a month,” said the Brotherhood’s Ismail, adding: “We are determined. No one can get us out of this place or any other place.”

Another major challenge facing Egypt’s new government is the security situation in the restive Sinai peninsula, which has witnessed a surge in violence over the past two weeks.

The military began deploying reinforcements on Tuesday, with numerous members of the security forces killed and wounded in drive-by shootings and rocket attacks by suspected Islamist militants.

Three policeman died in separate attacks in north Sinai on Wednesday night and another was shot dead on Thursday, according to security sources, while the armed forces have killed ten jihadists since launching their latest operation.

On the diplomatic front, the new Foreign Minister Nabil Fahmy held talks with his US counterpart John Kerry on the latest efforts to relaunch peace talks between the Israelis and the Palestinians, and on the domestic situation in Egypt.

Like most of the international community, the United States has refrained from saying Morsi was the victim of a coup, which would legally require Washington to freeze some 1.5 billion dollars in US military and economic aid to Cairo.

Speaking in Amman on Wednesday, Kerry said the Islamist president’s removal had arisen out of an “extremely complex and difficult situation.”