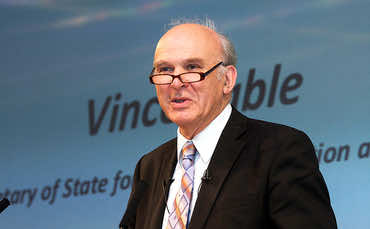 Britain on Friday announced it was revoking export licences for equipment used by Egypt’s military and police amid concerns it could be used against protesters.

The licences concerned cover components for armoured personnel carriers and for machine guns, as well as radio and communications equipment, including for tanks, a spokeswoman for the business ministry told AFP.

“We are deeply concerned about the situation in Egypt and the events which have led to the deaths of protestors,” Business Secretary Vince Cable said in a statement.

“The government takes its export responsibilities very seriously and operates one of the most rigorous arms export control regimes in the world.”

He added: “Whilst we have no reports of British equipment being used in the unrest in Egypt, we have taken the decision to revoke five licences.”

Cable said Britain had a long-standing policy of refusing exports of goods used for internal repression.

“We will not grant export licences where we judge there is a clear risk the goods might be used for internal repression, provoke or prolong conflict within a country, be used aggressively against another country or risk our national security,” he said.

A report by the British parliament’s committees on arms export controls on Wednesday raised questions about the 134 export licences currently approved to Egypt, which are worth ?59 million (67 million euros, $90 million).

Tens of thousands of Islamists poured onto Egypt’s streets on Friday demanding the reinstatement of Mohamed Morsi, the president ousted by the army following huge street demonstrations against him.

Although mostly peaceful, the protests by Morsi loyalists have resulted in deadly clashes, with the unrest claiming more than 100 lives in all, according to an AFP tally.

“All licences for exports of controlled goods to Egypt have been assessed on a case-by-case basis against a range of internationally agreed stringent criteria which take into account the circumstances at the time the licence application was made,” Cable said.

“However, as a result of the changing situation in Egypt, we have conducted a review of UK export licences to this country.

“When circumstances change or new information comes to light we can revoke extant licences where the proposed export is no longer consistent with the criteria.”