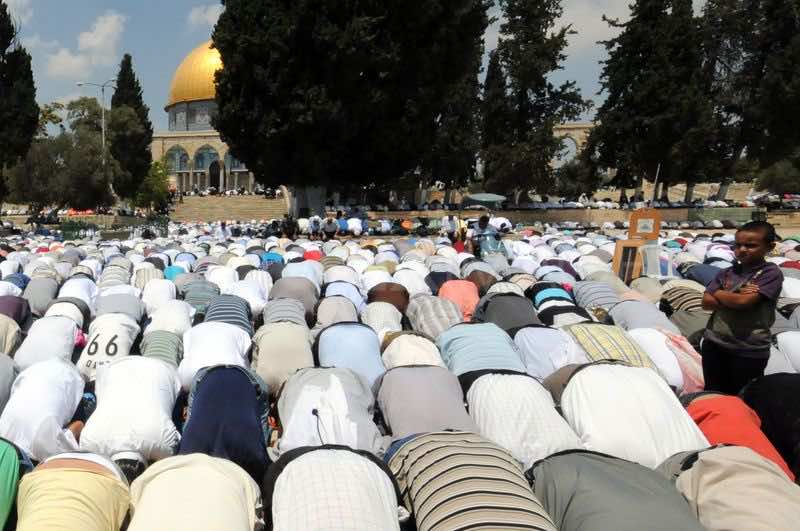 Some 155,000 Muslims attended prayers at Jerusalem’s Al-Aqsa mosque compound on the second Friday of the Muslim fasting month of Ramadan, Israeli police said.

Last Friday’s prayers at the site were participated by some 80,000 worshippers.

After the prayers on Friday, hundreds of Hamas supporters took part in a rally in favour of ousted Egyptian president Mohamed Morsi and against army chief Abdel Fattah al-Sisi.

Demonstrators held posters with Morsi’s picture and chanted “Morsi is the Egyptian president, Sisi is an American collaborator”.

A similar demonstration took place last Friday at the site.

Morsi was ousted by the Egyptian army on July 3.  More than 3,000 Israeli police were deployed in the walled Old City, where the compound is located, and elsewhere in occupied east Jerusalem, police said.

Israeli authorities relaxed usual restrictions on entry to Jerusalem by West Bankers for the second week, enabling access to women of all ages and men over 40 years of age.

Palestinians from the West Bank and the Gaza Strip are usually barred from Israel and from east Jerusalem, which the Jewish state occupied in the 1967 Six-Day war and then unilaterally annexed.

The Al-Aqsa compound, which lies in Jerusalem’s Old City, houses the Dome of the Rock and the Al-Aqsa mosque, the third holiest site in Islam.

Known to Jews as the Temple Mount, the compound is a deeply sensitive location where clashes frequently break out between Palestinian worshippers and Israeli forces.

Jews are not allowed to pray inside the Al-Aqsa mosque compound.