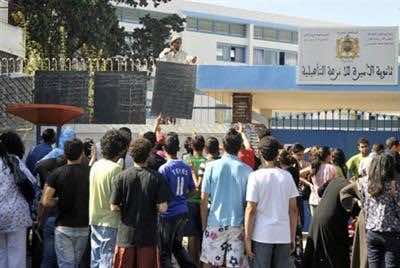 The Ministry of National Education on Friday announced the results of baccalaureate resit exams, and the number of students who passed the exams reached 47,193 out of 337,801 candidates.

According to a press release by the Ministry of National Education, the success rate in the resit session reached 31.63%, bringing the total number of students who successfully passed this year’s baccalaureate exams to 194, 221 with an overall success rate of 51.48 %.

In the regular session, females outperformed males, at the national level, in the baccalaureate exams and the percentage of success in their ranks reached 51%.

The students of scientific and technique disciplines outperformed their peers in arts and linguistics with a success rate of 57.67%, and 43.47% respectively.

According to a press release by Ministry of National Education, the total number of enrolled candidates, comparing to last year, increased by 8%, with an increase of 6.73 % for girls and 9% for boys compared to June 2012.

The number of students who passed the two sessions of baccalaureate exams reached 210,531 students last year, according to the same source.

Baccalaureate Results of the Resit Exams to be Released on Friday

Baccalaureate results to be released on Wednesday