Morocco World News
Home Highlights on Morocco Keys of Rabat given to King Juan Carlos I of Spain as... 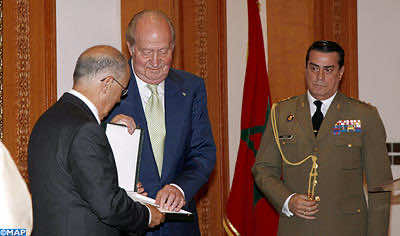 The keys of the city of Rabat were handed, during a ceremony on Thursday in Rabat, to King Juan Carlos I of Spain as a sign a respect for this illustrious guest and to affirm the friendship and trust between the Spanish and Moroccan peoples.

It is an honor to be given this symbol of Morocco’s capital, said the Spanish sovereign during the event attended by Moroccan and Spanish figures, stressing the historical ties between the city and Spain.

This beautiful city, which is part of the UNESCO Universal Heritage, is hosting the second World Summit of Local and Regional leaders, an event in which participate representatives from several Spanish cities, many of them are linked by twinning agreements with Rabat, said King Juan Carlos I.

Chairman of the city of Rabat’s town council Fathallah Oualalou, who handed to the Spanish sovereign, on behalf of Rabat inhabitants, a copy of the capital’s key and another of the Mohammed V Mausoleum’s gate, underlined the importance of this symbolic gesture which mirrors the huge esteem for King Juan Carlos.