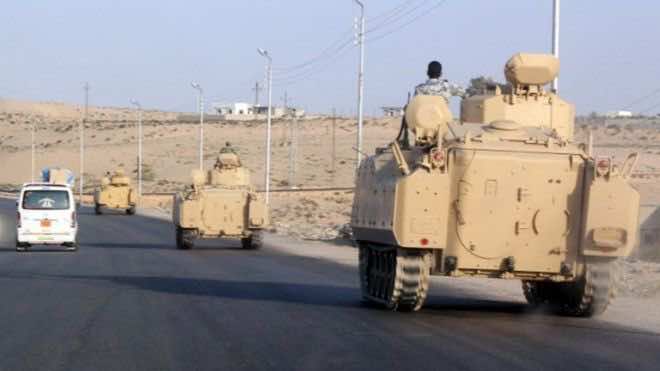 Two civilians were killed and one wounded when militants fired rockets at an Egyptian army checkpoint in El-Arish, one of several attacks on Friday in north Sinai’s main town, medicaland security sources said.

The assailants hit a residential house by mistake, and one of those killed had his legs and head blown off in the attack, hospital sources told AFP. Two police stations were also targeted by heavy machine gun fire, according to security sources, while witnesses said militants fired rockets at an armycamp, with no casualties reported in those attacks.

Apache helicopters were seen pursuing the militants. Earlier, gunmen wounded a soldier in a drive-by shooting at a army checkpoint in the same town, located on the Mediterranean around 40 kilometers (25 miles) east of Gaza.

The Egyptian army launched a major offensive earlier this week against Islamist militants in north Sinai, which has been rocked by deadly violence since the military ouster of Islamist president Mohamed Morsi on July 3.

Suspected militants have killed and wounded numerous members of the security forces in drive-by shootings and rocket attacks while the army has killed ten jihadists since launching their latest operation, according to security sources.

The violence in the increasingly lawless region has also claimed the lives of two Egyptian Christians, one of whom was found decapitated five days after being kidnapped.

And at dawn on Monday, three workers from a cement factory were killed in an attack on the bus in which they were travelling in El-Arish.