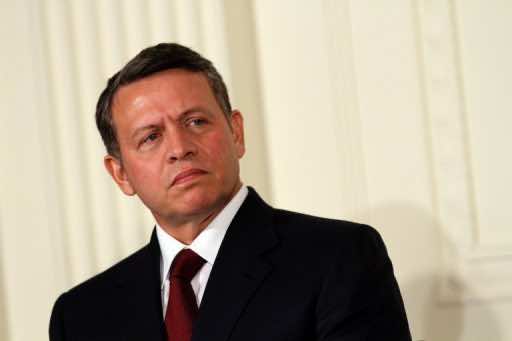 Jordan’s king on Saturday became the first head of state to visit Egypt since the army ousted its Islamist president, whose supporters pressed protests after a night of deadly clashes.

King Abdullah II, who faces challenges at home from Islamists, was among the first leaders to congratulate Egyptians after the military overthrew president Mohamed Morsi in a popularly backed coup on July 3.

The monarch was greeted at Cairo airport by the army-backed interim prime minister Hazem al-Beblawi, and then held talks with caretaker president Adly Mansour and vice president Mohamed ElBaradei.

His visit comes as the newly installed regime launched a public relations campaign to burnish its credibility, and as thousands of Morsi supporters continued a sit-in at Cairo’s Rabaa al-Adawiya mosque.

The Islamists had rallied in the tens of thousands on Friday, waving Egyptian flags, carrying portraits of the toppled Islamist leader and denouncing Abdel Fattah al-Sisi, the army chief behind the coup.

Despite warnings by the military, some protests turned violent with three people killed in the Nile Delta city of Mansura.

The protests, dubbed “Breaking the Coup” by Morsi’s Muslim Brotherhood, came three days after Mansour swore in a caretaker cabinet, whose legitimacy the Islamists have categorically rejected.

The cabinet has faced a mixed international reaction. The African Union has suspended Egypt’s membership, while some Gulf countries that distrusted Morsi have pledged billions of dollars in aid.

Britain announced it was revoking export licences for equipment used by Egypt’s military and police amid concerns it could be used against protesters.

The ministry would “form a committee to follow what is published about the revolution abroad and to provide sound information,” Fahmy told a news conference.

Egypt also sent an envoy to African states to convince them that Morsi had been removed by a popular revolution, he added.

The foreign minister sounded a more cautious note in dealing with the Syrian crisis, after Morsi had solidly backed increasingly Islamist-led rebel fighters.

Morsi’s decision to cut diplomatic ties with war-torn Syria would be “re-examined,” Fahmy said, while stressing that did not mean they would “resume or not resume”.

The minister is due to meet the new leader of Syria’s main opposition coalition, Ahmad Assi Jarba, on Sunday.

“There is no intention of jihad in Syria,” Fahmy, the former Egyptian ambassador to Washington, said in reference to calls for a holy war in Syria under Morsi’s presidency.

He did not address Morsi’s fate, after European and US calls for the new government to release him from detention.

On Thursday, interim president Mansour had warned his opponents against steering Egypt into “the unknown,” saying he would fight for stability.

But Morsi’s supporters believe a sustained campaign of protests could persuade the military to restore him briefly ahead of general elections.

A vast crowd had gathered at the Rabaa al-Adawiya mosque on Friday, where Morsi loyalists have camped out since the week before the military overthrew him.

The deposed president has been held in custody since his overthrow, while the authorities has also detained other senior Brotherhood leaders and frozen their assets, prompting international concerns.

UN rights chief Navi Pillay summoned the Egyptian ambassador in Geneva and requested information about those arrested in connection with the events since the July 3 coup, her spokesman said.

In the worst bloodshed, at least 53 people, mostly Morsi supporters, were killed outside the Cairo headquarters of the Republican Guard on July 8.

The Brotherhood accuses the army of committing a “massacre,” while the military says it was responding to a “terrorist” attack.

Demonstrations by those celebrating Morsi’s ouster have been far smaller than the mass rallies that swept the country in the days leading up to the coup.