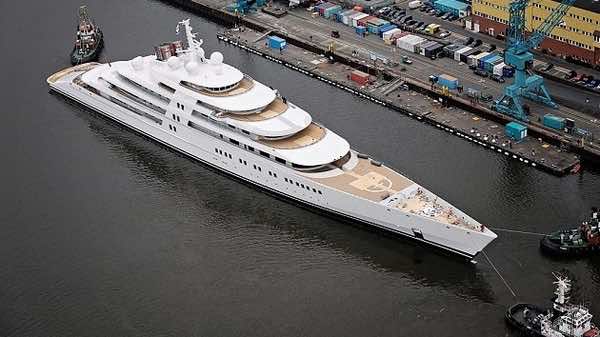 Azzam, the world’s largest and fastest private yacht, reportedly belongs to a “mysterious” Arab billionaire, said to be one of the richest men on the globe.

Some reports claim that the superyacht is owned by an oil mogul from the United Arab Emirates, while earlier reports have said that a member of Saudi Arabia’s royal family is the new proud owner of the ‘biggest and baddest’ yacht in the world.

Riddled in secrecy, it is not yet clear who the owner of the boat is or why the name has yet to be revealed.

The boat is over 590 feet in length and about 55 feet more than the previous world-record holder, the Eclipse, which is owned by Russian billionaire Roman Abramovich.

The ship is currently docked at the Lurssen shipyard in Bremen, Germany, according to UAE’s Top News.

“To put that in perspective, the Azzam super yacht is almost two full football fields in length, and hosts a variety of unique features, from a defensive missile system to no less than two helipads,” said a report by the Examiner.

According to the report, the yacht allegedly cost over $600 million to build and has been in the making for almost four years.

The superyacht – which sails at roughly 35 miles per hour – has many features that have not yet been disclosed, said the Examiner, adding that it has “bullet proof glass in and around safe rooms and the master bedroom, a mini-submarine that can be detached to visit the seafloor, a movie theater, a restaurant and even a disco room.”