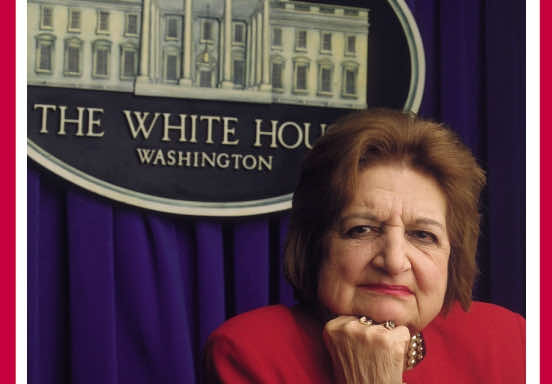 Death took away one of the most powerful voices who spoke truth to power and strongly opposed the United States foreign policy. At age 92, Helen Thomas passed away on Saturday in her apartment in Washington DC. The journalist who brandished her pen in face of the American presidents since John F. Kennedy to Obama surrendered to her long illness after a long life of commitment to truth, justice and peace in the world.

Born to Lebanese immigrants, the seventh of nine children, Helen Thomas chose the career of journalism as a job that would quench her thirst for knowledge and sate her boundless curiosity. For 57 years, Helen Thomas was hired by United Press International before spending her last decade as a columnist for Heart Newspapers. After attending several presidential press conferences and proving her sharp insight by asking blunt questions, she was promoted to the position of White House correspondent in 1970. In 2010, Helen Thomas was forced to retire following her backlash against Israel.

Asked to comment on Israel, Helen Thomas replied: “Tell them to get the hell out of Palestine. Remember, these people are occupied and it’s their land, not Germany’s, not Poland’s.” When asked where the Jews should go she replied: “Go home; Germany, Poland, America and everywhere else.” These comments were interpreted as anti-Semitic but Helen Thomas never regretted saying the “truth.” “I paid a price but it’s worth it to speak the truth,” she told the Joy Behar Show presenter on HLN TV.

Traditionally, Helen Thomas had a seat in the first row and asked the first question during White House press conferences, but because of her blunt and honest questions that challengeed mainstream journalism, Thomas was moved to the back row during the Bush administration.

“She covered every White House since President Kennedy’s, and during that time she never failed to keep presidents — myself included — on their toes,” president Obama once said about her.