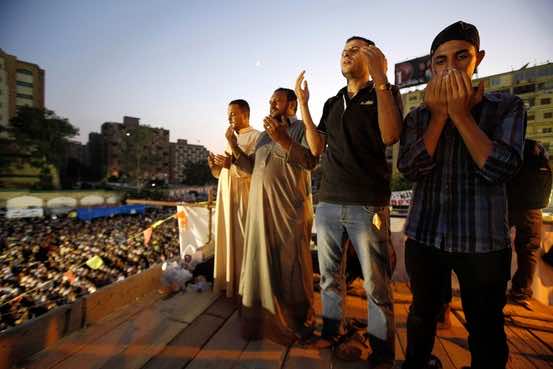 If there is any worthy lesson to extract from the recent Military soft coup in Egypt, it must be the unrealistic reality that there are peoples who are able to coexist with authoritarianism for tens of years, but cannot stand democracy for a single year.  It is within the limit, considering the time and the available tools, as well as the challenges to overcome, of one year that the Egyptian newly elected president is judged to be unable to pull the country out of all the imbroglios it has been undergoing. Not only this, but the president is blamed for concentrating, oftentimes planning to concentrate, all powers in his hands instead of working in harmonious concurrency with all the political players of the nation regardless of what ideology they are. Nevertheless, the mostly pertinent query, if neutrally approached, as to whether the opposition’s upraise to oust Morsi emanates from righteously noble urges or merely antagonistic motives should, and only can, have one response: Morsi’s presidency was doomed.

A premiere argument the opposition leaders would reiterate questions the legitimacy of a democratically elected president when faced by street protestations. One of them points out, “Democracy is not just the ballot box” but also the commitment of the elected leader to the soul and heart of democratic practices that dictate working for and towards the civil rights of all people. After all, another ironically argued, even Adolf Hitler had been elected president democratically only to end up putting on the devil’s pajamas; if the Germans had courageously marched against his imperialistic fantasies, the world might not have endured the apocalyptic devastation of World War II. Though, the dissemblance between Morsi and Hitler is as large as life.

According to a number of leading protestors, Examples of infringement include (1) the writing of the constitution without engaging the opposition, (2) the concentration of all powers in the hands of the president and members of the Muslim Brotherhood, and (3) the inability of the government to convalesce the living conditions and the induction of social justice as promised during the presidential electoral campaign. The bottom line is that the wheels of Egypt were flying off and the president had to throw the towel for capable leaders to steer the nation through the marring challenges of the incessant merciless strikes of time.

However, the scenario the anti-Morsi movement connived and contrived to carry out, reveals how radical, fundamental, abnegating, and specially, astigmatic the recent rise has been.  A pyramid analogy does, ergo, absorb and reflect the whole status quo, for the army, the civil opposition and the media together constitute the angles while the judicial system stretches its octopuslike arms through its area. In their article In Egypt, the Deep State Rises Again, Charles Levinson and Matt Bradley of The Wall Street Journal points out, “Egypt’s opposition and Mubarak-era officials began to mend in November…Some meetings took place at the Navy Officer’s Club, where the generals said that if enough Egyptians joined public protests, the military would have little choice but to intervene.”  The military ultimatum after the opposition took out to the Squares was so clear and so vague; for the opposition, it only signified the end of Morsi and his government as concurrently planned. Yet, the brotherhood, and all those who thought Egypt was at last a democracy, the clarity of the ultimatum was blurred by their trust and inability to calculate the development of events accurately.

Mike Giglio on the Daily Beast has revealed, “although they pretended to be neutral, the Egyptian Army played a role in planning the ouster of President Morsi.” He highlights how the Tamarod leaders were in regular contact with a group of retired military officers,” who “promised to protect the protestors” and “said they were reaching out on behalf of the Army’s current commanders.” Amazingly, at the time the Army and the Police were protecting the anti-Morsi protestations, the Muslim Brotherhood’s headquarters were being bulldozed since police officers paraded along civil protestors in reckless infringement of duty. They justified their inappropriate acts by not having to work for “the benefit of a certain political party,” as reported by Ahmad Tarnah of the Egypt Independent. The alike of this policing logic could only emanate from, a bleared and blearing vision of the intersection between rights and obligation, a handicapped interpretation of the private interest and the common good, and, above all, a misunderstanding of where democracy starts and where it does actually end.

To limit the size and slow the speed of any reverberations the toppling of the president might instigate, the army abruptly and without a legal warrant closed down all media outlets that voice out the opinion of the Brotherhood and their sympathizers; they have closed all opposing local channels and distorted the foreign ones; an act that has hit the heart of the freedom of speech the revolution of January 25 had gloriously achieved.  There is actually no sound interpretive reading that might not condemn the closure of local T.V. stations prior to any legal warrant, and worse still, the arrest of tens of journalists.  It is, henceforth, quite safe to claim that the media exclusive despotism in the Egypt of today is of no-alike throughout the modern history of the nation. What logic could explicate how and why all the currently allowed operating channels are not only all-out partisans of the Tamarod Movement but also deeply hostile to opinions that flow along the Islamic stream.

The Army, with the benediction of the opposition, has launched a series of arrests against the leaders of the Muslim Brotherhood immediately after the ousting of the president. During one week, the number of members of the Freedom and Justice Party arrested rose to almost 300, and no state official has yet offered any credibly dependable account for this very condemned act. Such a condemnation should stem and node from no sympathy for the Muslim Brotherhood, whatsoever, but simply, not simplistically though, from the universal legal and ethical concurrency that political belonging is the right of all citizens as long as it does constitute no domestic and/ or interstate threat.

It is in Egypt where the president of yesterday is the prisoner of today, where the legitimacy of the righteous falls apart in the chasm of the unrighteous, where opposers oppose just for the sake of opposing, where chaos roams the heart of consequential order, where the spears of pervasive pertinacity are chucked into the wheels of the nation’s future, where Western democracy divides a Southern nation, and where two presidents are in arrest.

After all, democracy does not happen. It is human made, and so is unfortunate chaos. Underdeveloped nations do not starve because of lack of rain or an excess of it. Whilst, the welfare of and in developed states is not thanks to regulated precipitation or a blessing of it. The difference is that while some people have experienced, known, valued and stuck to democracy, others, when the window of opportunity has reached their doorstep, have cruised deeper than deep. There, they are beyond democracy.

Only Egyptians can lead Egypt through the current marring political and economic imbroglios facing the country; nevertheless, that could never be securely reached if not all parties are willingly prepared to re-mould, reevaluate and reprioritize their interests towards the welfare of the nation as a whole.

Mahatma Gandhi once said, “an eye for an eye makes the whole world blind”.  Yet, the question to wonder about is what Gandhi would say in comment on the only nation in modern, and may be all through, human history that has dared to imprison two presidents at the same time.