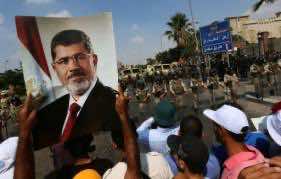 Demonstrators from both sides clashed, throwing rocks and firing birdshot, according to members of the emergency services. Police fired tear gas to disperse the clashes.

The violence broke out when a group of pro-Morsi demonstrators marched near Tahrir square, the epicentre of the demonstrations that lead to the ouster of the elected Islamist president on July 3.

Tensions are running high in Egypt nearly three weeks after the army ousted Morsi following massive protests calling for him to go.

His supporters, however, have pressed demonstrations of their own calling for his reinstatement.