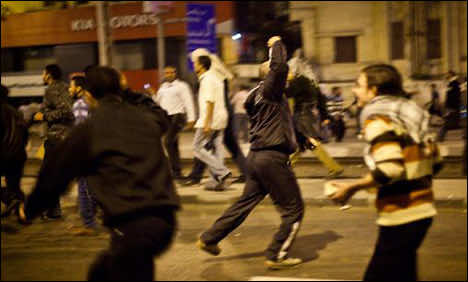 Dozens of people were injured in Cairo clashes Monday as the family of Mohamed Morsi said they plan to sue Egypt’s army chief for having “kidnapped” the ousted Islamist president.

Supporters and opponents of Morsi clashed in Tahrir Square, throwing rocks and firing birdshots, according to members of the emergency services. Police fired tear gas to disperse them.

Dozens of people were injured, medics said, in the clashes that erupted hours after hundreds of Morsi supporters held protests elsewhere in the Egyptian capital.

The clashes came a day after the interim cabinet held its first meeting and called for peaceful protests after weeks of nationwide demonstrations and deadly violence in the restive Sinai Peninsula.

Shaimaa Mohamed Morsi, the toppled president’s daughter, told a news conference that the family were planning to take legal action in Egypt and abroad.

“We are taking local and international legal measures against Abdel Fattah al-Sisi, the leader of the bloody military coup, and his putschist group,” she said of the army chief.

She voiced dismay at “the silence of rights organisations and civil society over the crime of kidnapping the legitimate president,” who was voted into office last year.

Morsi has been detained at an unknown location since his overthrow by the army on July 3.

Morsi’s son Osama said the family had not heard from him since his overthrow. “None of us has had any contact with our father since the afternoon of the coup on July 3,” he told reporters.

Several countries, including the United States and Germany, have called for Morsi’s release, but the Egypt’s interim authorities have rejected the calls, saying he is being held in a “safe place”.

Supporters of Morsi, who was ousted after a single year of rule following a presidential election, have pressed demonstrations, holding marches and protests across the country since his fall.

Occasionally, these rallies have lead to violence, and on Monday evening dozens were wounded when supporters and opponents of the deposed president clashed in Tahrir Square.

The violence broke out when a group of pro-Morsi demonstrators marched near Tahrir Square, the epicentre of the demonstrations that lead to his ouster.

Earlier on Monday, hundreds of Morsi’s supporters held protests calling for his reinstatement

The council was overwhelmingly dominated by Islamists under Morsi’s presidency, and held all legislative powers. But Egypt’s new authorities dissolved it when they toppled Morsi.

Hundreds of the Morsi’s backers also marched to the public prosecutor’s office and the defence ministry on Monday.

Chanting “Sisi killer,” and anti-police slogans, demonstrators hung pictures of the ousted president on the gates of the public prosecutor’s office.

“I believe we will restore him by more pressure on the streets,” Mohammed Awad, one of the protesters, told AFP.

Others at the march denounced the legitimacy of the new interim authorities.

Supporters of Morsi also rallied in the Abbasiya area of Cairo, near the defence ministry.

On Sunday, the cabinet meeting focused on Egypt’s battered economy and efforts to boost the security situation in the country.

In the wake of Morsi’s ouster, militants have ratcheted up attacks on security forces in the restive Sinai, killing four security services personnel and two civilians on Sunday.

Assailants shot dead the three soldiers and one policeman in separate attacks in the town, and two civilian bystanders were killed later when the army traded fire with a group of gunmen, security sources told AFP.

In Rafah, a Sinai town that straddles the border with the Gaza Strip, unknown assailants launched an attack on a Central Security (riot police) camp with mortars and rocket-propelled grenades, wounding five policemen.